So this build started with a desire I've had for a long time to build a retro TT bike. I've attempted to do this in the past, but never completed it because I realized the bike wasnt going to be as fast as a modern Cervelo time trial bike. While, my outcome might still not be that fast, I think it's probably pretty close. 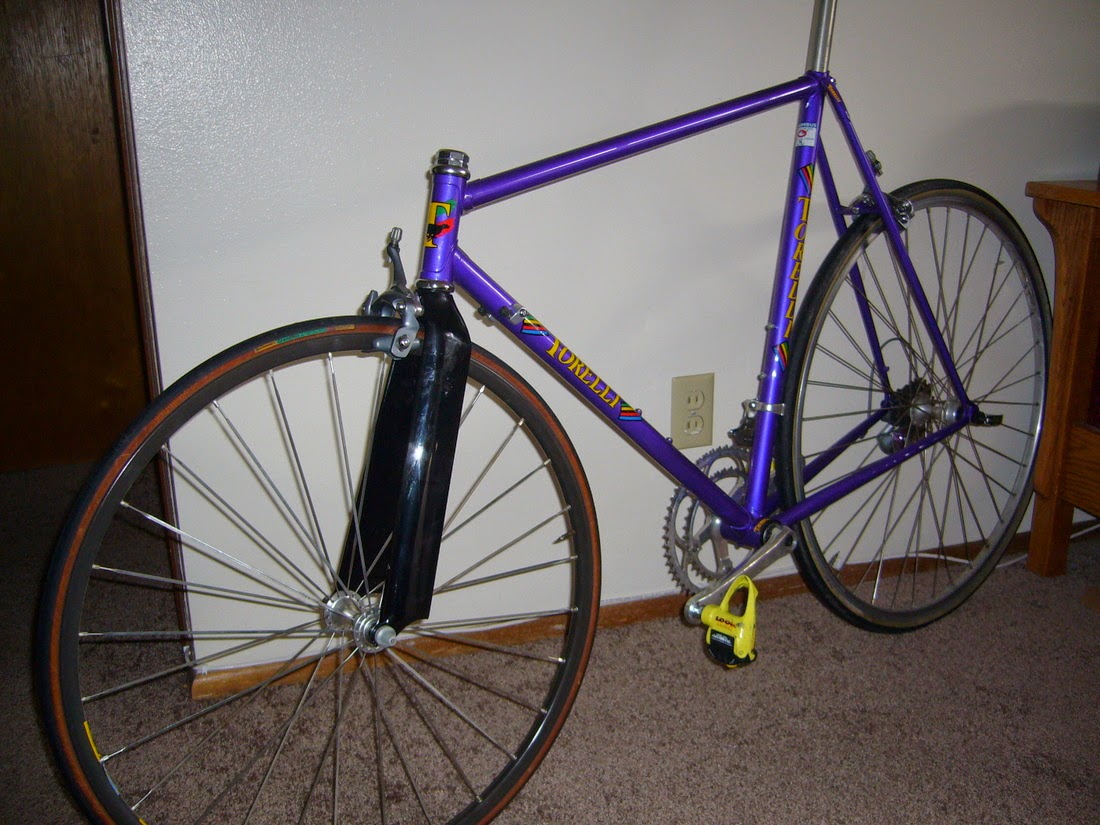 So one of the caveats of this build was that I wanted it to be fast ---- as fast as possible. Retro wasnt really a "design theme" it just kind of happened that way. Partially because of the aero-revolution that occurred back in the late 80's/early 90s and the parts are cheap.

Cheap was the design theme. And fast. And neon.

So I had this 56cm Schwinn Varsity and I remembered that Gerard Vroomen from Cervelo once said in a newsgroup that the Schwinn fork was the fastest fork Cervelo ever tested in the windtunnel. 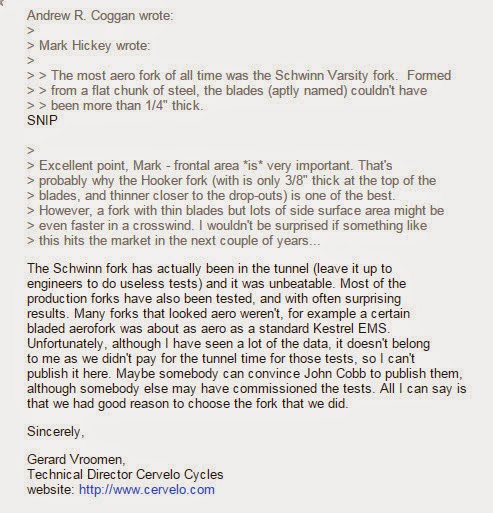 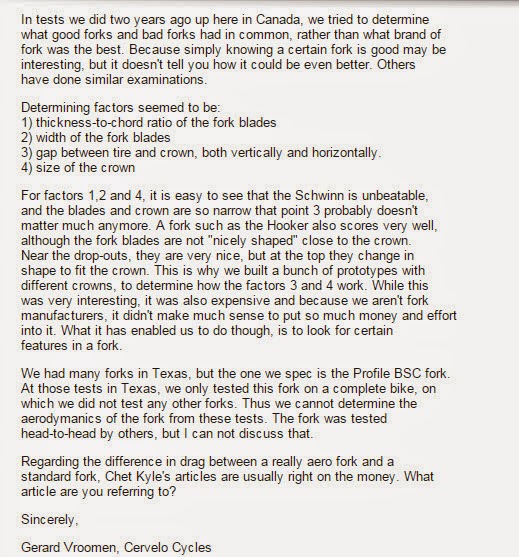 So I went to my local Craigslist and picked up this Schwinn Varsity for like $25. And began building it up.

One of the reasons I decided to build up the Varsity was the fork and the known aero attributes, the other "advantage" is that the tubes are super small. This bike is not standard. The headset is special, the rear wheel spacing and front wheel spacing, the seat tube is narrow. It takes a special 13/16" seat tube which was basically just used on old Schwinns and some old BMX bikes.

So you can see that slack seat tube angle above and how far back that saddle is compared to the BB. This was going to be a problem ---- I like riding super aggressive seat tube angles. I was imagining that I was going to have to either build or have built a customer seatpost that looked something like this:

And I still might do this, but while browsing eBay one night I came upon this:

So then, I was like this is cool but what this frame needs is a fairing behind the headtube. I did a similar thing on my Cervelo P3 a few years ago.

I did some searches for Schwinn Varsity Time Trial and found this result from Slowtwitch. The guy shaved the cable stops off the tubes and ran the cables through the frame. I liked the idea and appreciated the effort, but didn't want to drill my frame and wanted to make the tubes more aero anyway.

What also fueled my motivations was a Specialized Win Tunnel video that a modern Shiv was "only" 73 seconds faster over a 40k than a steel round tube bike. link 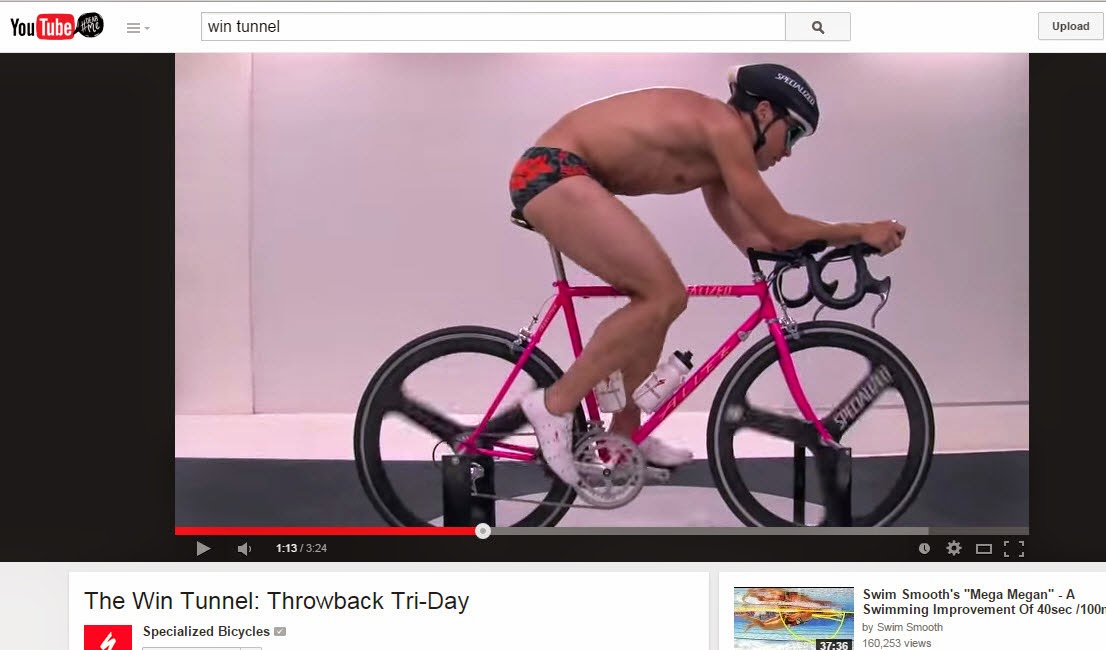 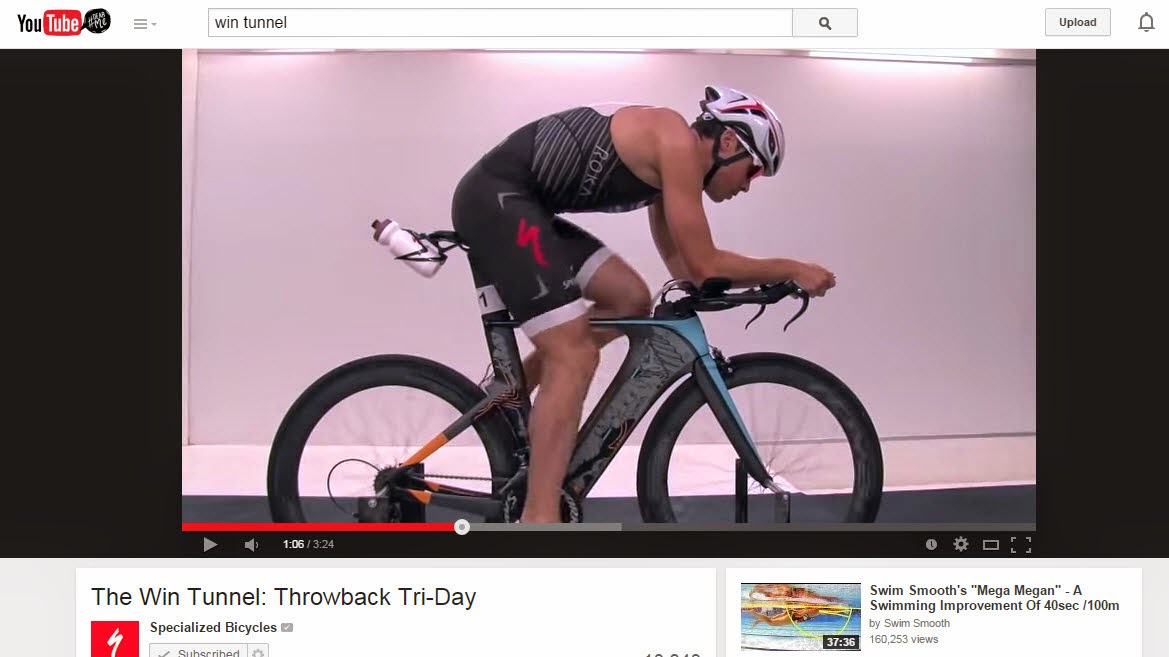 The thing was, my red/white/blue Schwinn was too damn pretty to grind off the cable stops. Hmmm what to do..............I just bought another Varsity off Craigslist for $40.

Sweet. So I grinded off all of the random cable stops. Sanded the frame down to get some of the rust off, then primed it white.

Then I got to work running my tubes that will house the shift cable housing. One tube ----- I epoxied it onto the downtube ---- zip ties are holding the tubing down while it dries.

So when I built the P3, I built up the shapes using Bondo. This worked, but I wanted to try something else. So I decided to build up the profile using spray foam. My idea was that it'd be easier to shape.

If I did it over, I wouldnt do this again. I'm a little concerned about how "stable" the foam is going to be as a base foundation. It seems to work so far. But we'll see. And it didnt make anything easier to shape ---- I still needed to Bondo over the foam, so that took a ton of hours. The only real advantage I can think of with the foam is that its lighter. But I don't care about weight with this build. It's a Schwinn Varsity!

Here are some more in development photos:

I considered fairing the seat tube too ---- but I wanted this project to be over sooner than later. Maybe on the next iteration.

Then I put a layer of fiberglass over the downtube in an attempt to "hold in" the bondo from cracking/popping out etc.

Clearcoated over the neon. Let dry 5 hours or until I couldnt stand it any longer ---- and begin building.

I just took off all the parts I hung on the red/white/blue Varsity. And put them on this one.

So I originally kept that downtube round (not airfoil) because I wanted to put a front derailleur on there. Then I read this thread on Slowtwitch and got to thinking: this bike is heavy, it wont go up hills, it's meant for flat time trials ----- so why do I need to a small ring? I dont.

I know from cyclocross experience that a double guard is one of the best ways to protect a chain from falling off. But I'm using the stock Schwinn 1 piece cranks which are special size -- like most things on this bike. I was planning on making an aero cover/fairing for the outer chainring anyway, so I figured that I just make two -- one inner and one outer.

I'll spare you the details, but it took some serious noodling on how to get these guards mounted just right. Each is four layers of fiberglass.

You can see the RD cable exit there as well

So here she is:

Some notes on the build:

Pedals - my A race is this run/bike/kayak triathlon which is more like a duathlon so I'll be racing in my running flats the whole race ---- the bike is short (12.5 miles)

Front brake -- Weinmann Delta --- from my parts box --- hard to find an aero brake that has a long enough reach. Had to trim the pads with a razor blade so they didnt rub the wheel.

Aerobars --- Scott 100k --- found these cheap on eBay ---- like $30 shipped. Figured they were the perfect bar for this bike ---- you can see from the first few pics I originally was going to use VisionTechs, my guess is that these are more aero. Also, since I only have a rear derailleur, I figured I might as well have two front brake levers ----- the vision lever (also from my parts box) is mounted on the end, and then runs to the cyclocross 24mm lever on the inside of the 100k bar.

BTA bottle mount --- this is actually from Target for $7 --- including cage! Velcros onto the top tube ----- which helps corral the cables.

I'm thinking I might have to replace the stem with something that has some more drop to it ---- this is a 140mm with 15 degree drop. We'll see if this lets me get as low as I want.

Also thinking about making a nose cone and maybe an enclosure for the seatpost.

That's pretty much it! Thanks for reading!
Want: 58cm Cervelo Soloist. PM me if you have one to sell

Quote Reply
Re: My Schwinn Varsity "SuperBike" [jeremyb] [ In reply to ]
Quote | Reply
Cdn_Biker
Post #4 of 41 (12137 views)
This is amazing! Super well done, and it makes me extremely jealous.

Feels like 75 lbs
Want: 58cm Cervelo Soloist. PM me if you have one to sell

Vintage Cervelo: A Resource
Quote Reply
Re: My Schwinn Varsity "SuperBike" [jeremyb] [ In reply to ]
Quote | Reply
Barchettaman
Post #8 of 41 (11998 views)
Jeremy, you´ve outdone yourself there!

Possible the most awesome bike on ST. When that thing gets rolling the little Modolo brake is going to be....well, ´put to the test´.

BTW I like this statement - ´The thing was, my red/white/blue Schwinn was too damn pretty to grind off the cable stops´.

I dont think that´s ever been said before about a Varsity.

(and the prettiest schwinn varsity I have ever seen ... )
Advanced Aero TopTube Storage for Road, Gravel, & Tri...Direct-mount & ZeroSlip-mount, made in the USA.
DarkSpeedWorks.com....Reviews....Instagram....Facebook
.
Quote Reply
Re: My Schwinn Varsity "SuperBike" [jeremyb] [ In reply to ]
Quote | Reply
Frost
Post #10 of 41 (11919 views)
Supercool!

I looked at adding covers to wheels, even using carbon to make discs but the weight - can't beat an off-the-shelf Zipp carbon over foam core, so not much point.

An air-core disc would be superllight I wonder if anyone is making that?


I'm sure you'll get a lot of comments. I am surprised that people recognize a tri bike frame, in adpated commuter trim for example.
Training Tweets: https://twitter.com/Jagersport_com
FM Sports: http://www.jagersport.com/

the biggest climbs are over the overpasses:

Want: 58cm Cervelo Soloist. PM me if you have one to sell

Had some scrap fiberglass from the chain guards so made a Garmin mount, not super pretty, but super done.

Want: 58cm Cervelo Soloist. PM me if you have one to sell

Had some scrap fiberglass from the chain guards so made a Garmin mount, not super pretty, but super done.

Quote Reply
Re: My Schwinn Varsity "SuperBike" [hisholiness] [ In reply to ]
Quote | Reply
hiro11
Post #22 of 41 (11357 views)
I admire the full on Crazytown vibe of this thread. DIY bikes are innately awesome.

I dig the Varsity, I think it's underappreciated as a piece of engineering. This bike defines practicality. The unique non-tubular electrowelding manufacturing process Schwinn used to make Varsity frames required lots of expensive equipment but resulted in a frame that to this day is the undisputed champion for overall toughness and durability. You simply can not kill a Varsity, no matter that you do to it. Tens of thousands of them are still out there, used and abused daily. Also, only a company with Schwinn's scale at their height could get away with making the Varsity for the price they sold it for. Raleigh had the same vertically integrated model back in the 50s and also made a lot of interesting stuff like the "All Steel" 20.

Likewise all of the componentry on the Varsity is bespoke, ridiculously long lasting, well made and tough. Non-standard parts can be a pain, but because so many Varsitys were made spare parts are still easy to come by and cheap. You see complete bikes at yard sales for $20 here in Chicago all the time. Not that you'll ever need to replace anything on these bikes.

I also like the fact that sheet steel was delivered at one end of the Schwinn Chicago factory and completed Varsitys came out the other end. The bike is entirely American made.

There are some room for improvement of course but no biggie.

1. If you're going to go that far, grind off stuff like the kick stand tube behind the BB!
2. If you're fairing in tubes, do the front as well. That's almost as important
3. If youre fairing in tubes, do it all at once so all the bondo or fibreglass goes off at the same time (less days of downtime while you wait for yet another product to dry/go off)
4. For internal cable routing, you could do like I did with my single speed. I tried drilling but it was the hardest steel known to man. I took an awl, with one hit, drove a hole where I wanted. Then bend the awl over and hey presto, a lovely angled entry or exit from the steel tube.
5. The brake lever needs to be turned 90 degree to avoid 5lb of drag.
6. For fibreglassing over foam, visit your local surfboard shaper. Hint, overfill with foam, then sand back to the shape you want, then glass over. There's several pounds of bondo to be saved. While weight wasn't your concern, no use making it heavy for no particular reason.

Still, looks like an awesome fun project. I hope it helps you achieve your goals.
TriDork