Best satire of Herbert I have seen. How long you been thinking of this one?

Then in P5 hybrid setup with maguras: 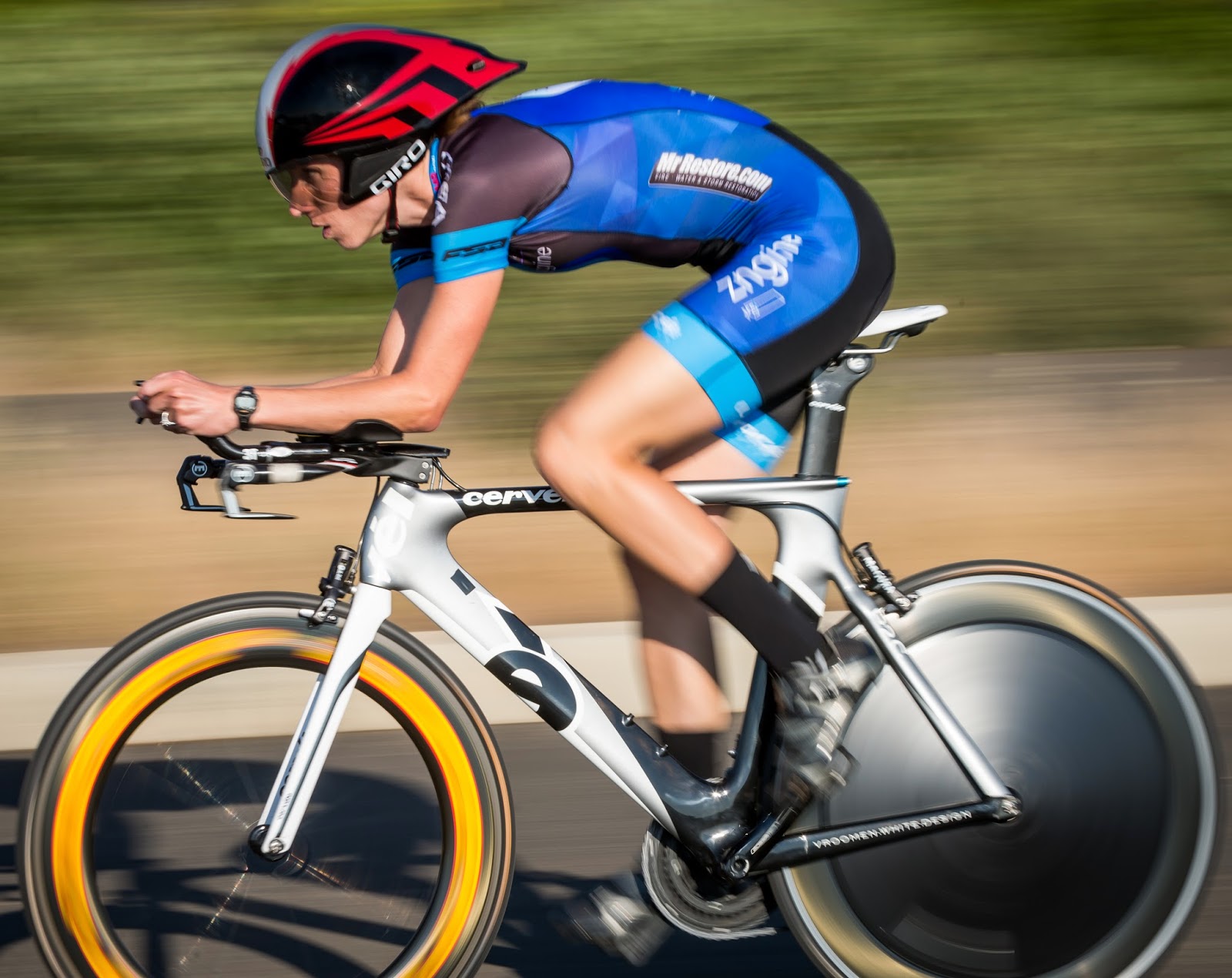 Kat Hunter reports on the San Dimas Stage Race from inside the GC winning team
Aeroweenie.com -Compendium of Aero Data and Knowledge
Freelance sports & outdoors writer Kathryn Hunter
Quote Reply
Re: Let's see your ride! [Staz] [ In reply to ]
Quote | Reply
maxtbicycle
Post #5334 of 6425 (40044 views)
You have an amazing bike especially with a stealthy black with glossy decals on it.

bx3 wrote:
We caught up with average age-grouper bx3, prior to his participating in the Canadian Iron 226 event this Saturday. He was kind enough to let us photograph his bike. bx3's bike is a NOS 54cm 2004 Cervelo P2K (9 speed) with 650 wheels. He picked up the bike in 2007, his third year of multisport competition. The bike has remained "stock", with the exception of an H3 front, and Wheel Builder Aero-jacket, up until 2014, where it was upgraded somewhat with new aero-bars, brakes, cassette, chain, and cabling. bx3 is approximately 5'10" and will be racing at 155 lbs this year. The bike in it's previous iteration has powered him to nearly identical back-to-back 5:17 splits in the 2012 and 2013 editions of the Esprit Triathlon. 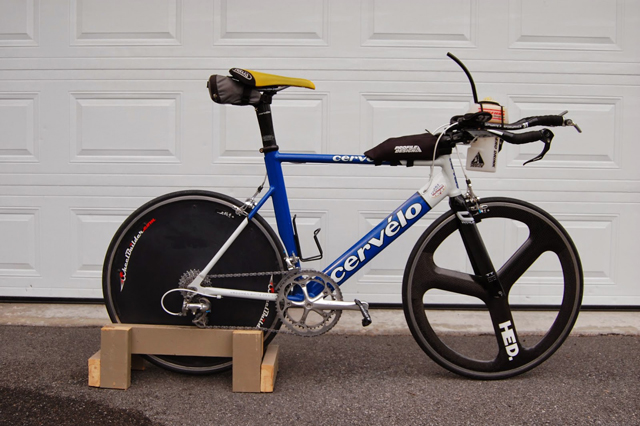 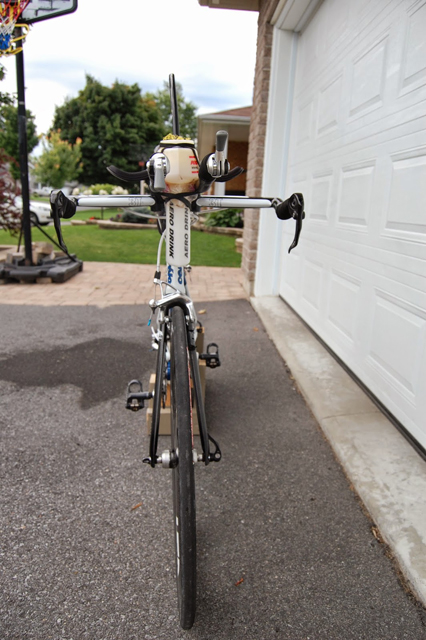 What the wind sees 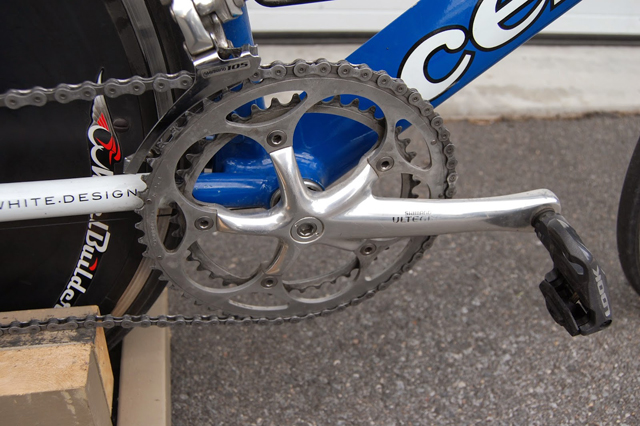 The front-end of the drive train is a 53-39 Ultegra crank, with 105 front derailleur. Look Keo pedals are attached to the 172.5mm crank arms. 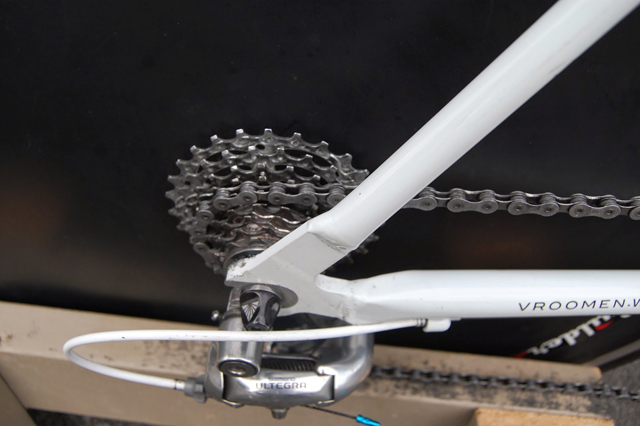 A 9-speed Ultegra 12-27 rear cassette is actuated by the Ultegra rear derailleur. 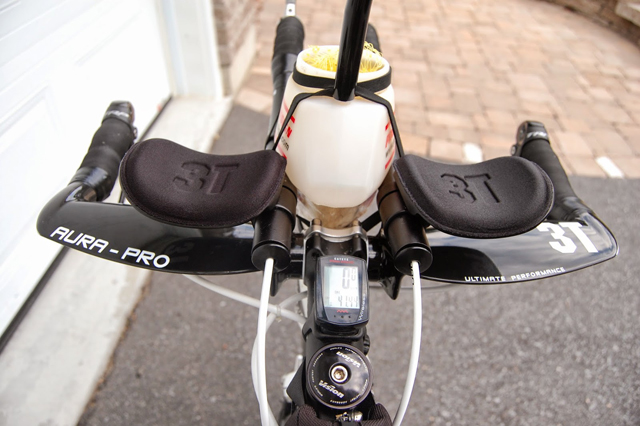 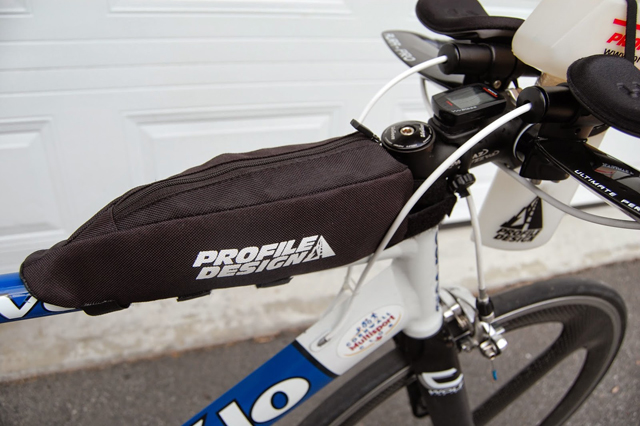 A Profile-Design aero bag is currently stuffed with 8 gels, a cliff bar, and 2 tabs of Gu-Brew ready for the upcoming 180km ride. 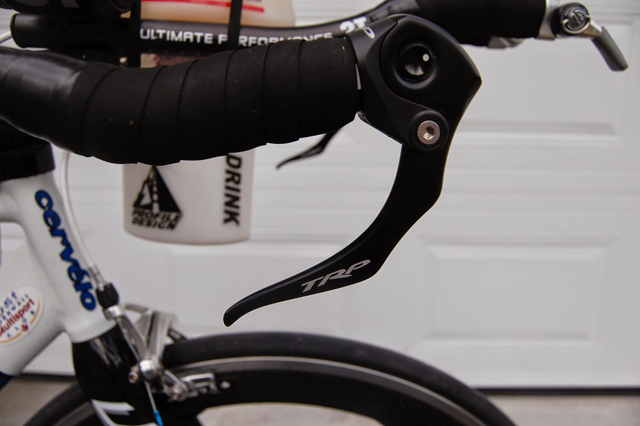 Alloy TRP levers are trusted to help actuate the speed. 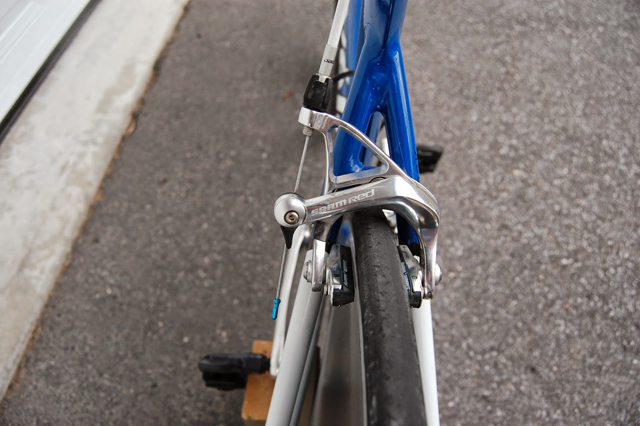 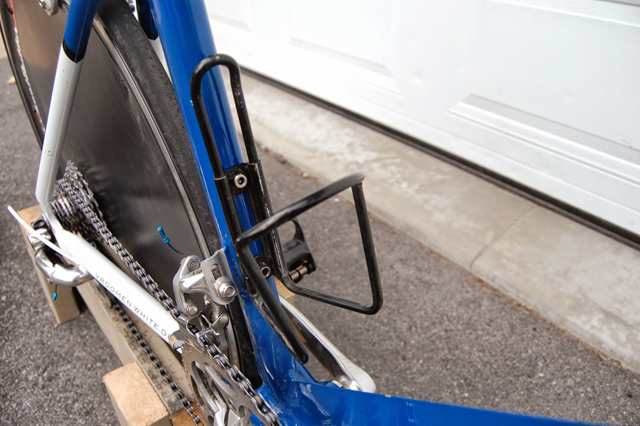 Primary hydration during Iron distance events is provided by the Profile Designs Aero-Bottle mounted up front. A standard bottle cage on the seat tube is for back-up hand ups from on-course bottle stations. 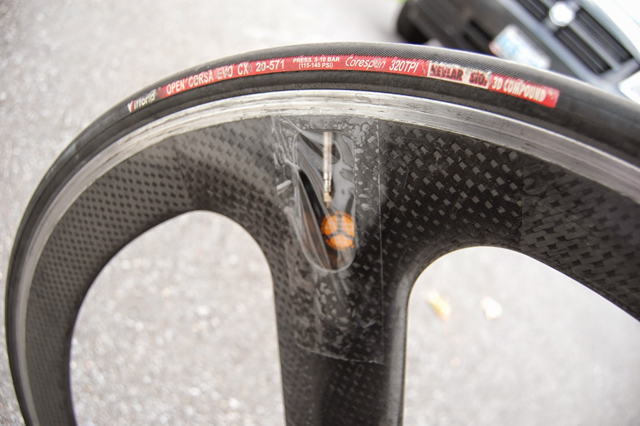 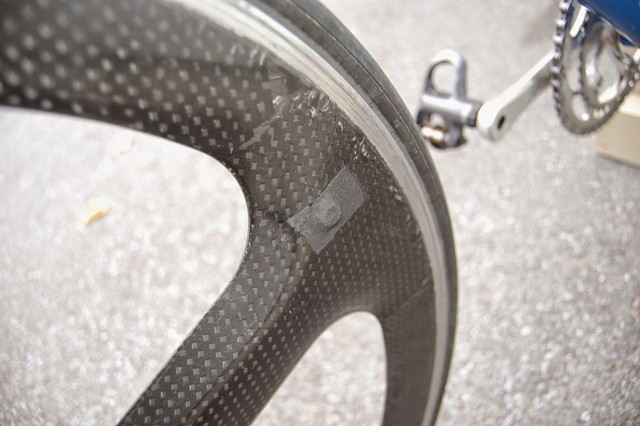 Another custom piece of hockey tape holds the wheel magnet for the Cateye in place. (4 years and still holding). 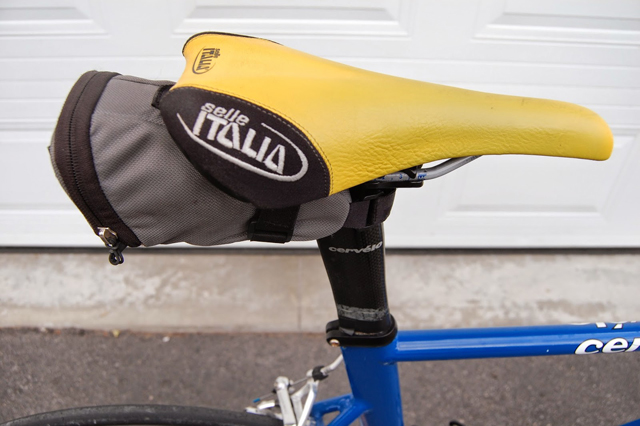 A Cervelo carbon seatpost connects this rider and his stock Selle Italia saddle to his ride. The dual seat post attachment is in the forward position. A saddle bag tucks in behind and holds a pump, chain tool, multi-tool, a set of levers and a spare tube. 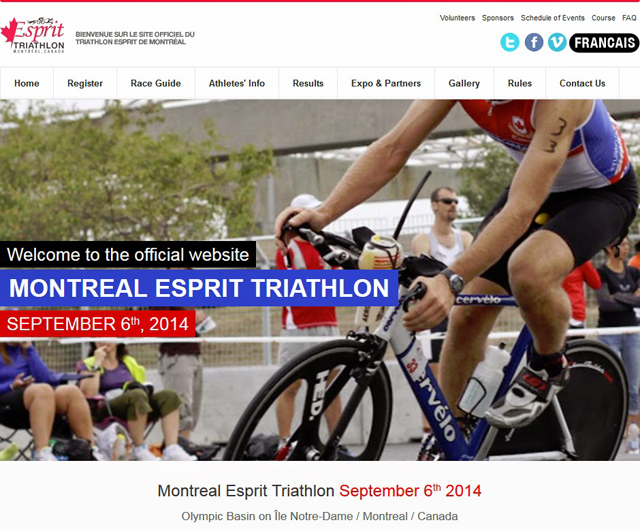 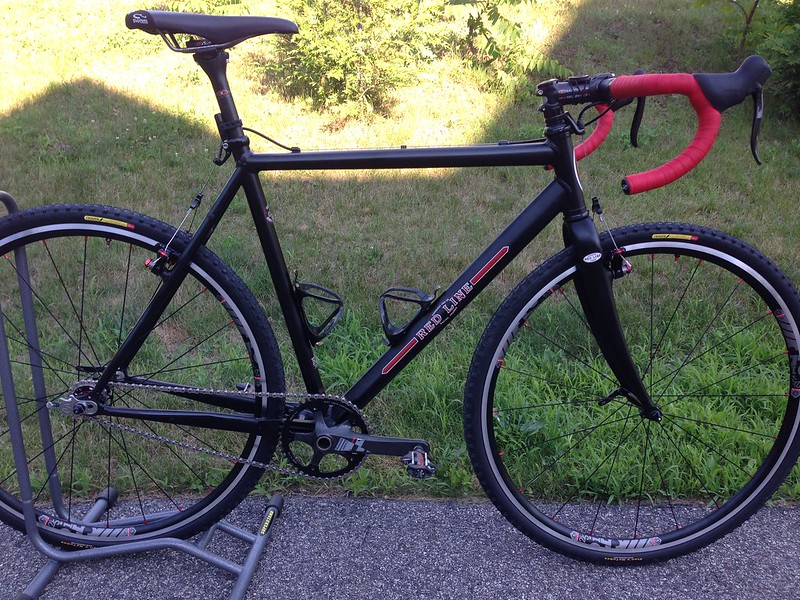 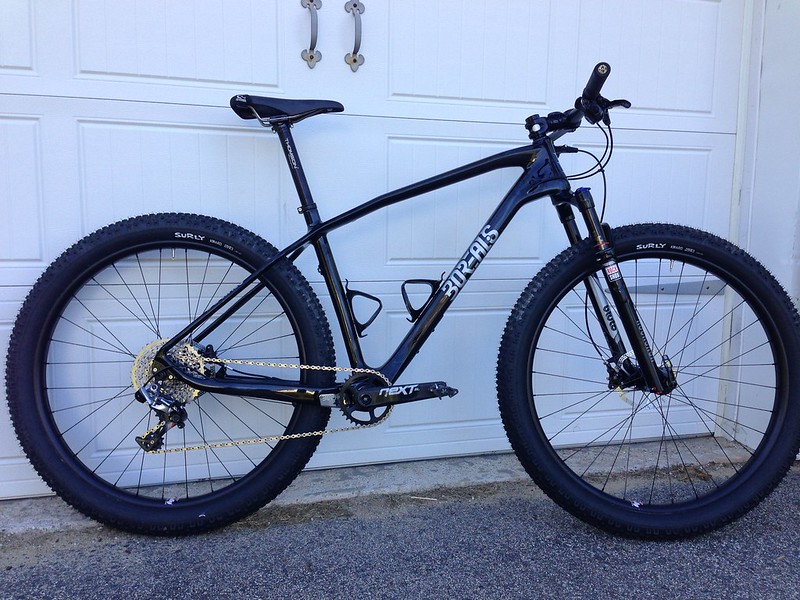 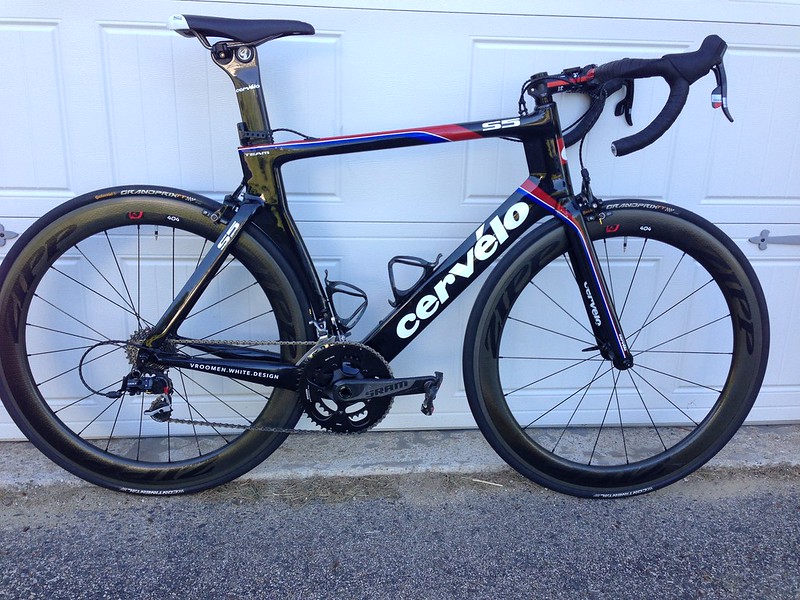 Quote Reply
Re: Let's see your ride! [jackmott] [ In reply to ]
Quote | Reply
alexZA
Post #5339 of 6425 (38274 views)
Awesome, and I'm looking forward to seeing more of those new FSA direct-mount brakes that look like Campy Deltas

Wheels are for sale at the moment that is crazy! you must go further.