After buying some new toys for the Zipp.
My Blog - http://leegoocrap.blogspot.com It is a Mavic Mektronic system.

Mavic introduced the Mektronic in 1999, it was a second generation of electronic shift system.

They went through a lot of trouble to make their Mektronic wireless shifting system legal, the UCI banned it anyway in 2000. 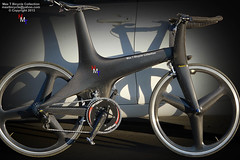 Sorry for the crappy cell pictures. Once I get the bike fit up and dialed in (Yup yup, seat, spacers, etc...), I'll load up some proper pics. 
- The tririg sigma stem (the thing is so short - height wise - that I was afraid to cut the steerer any shorter, so it has a spacer or two under it now ;) ) which was even better than I had expected.
- Omega brakes on the front and rear. Setting it up on the rear took me and a friend and a stand and a bit more time than I expected, but the rear actually slows the bike down now!
- Nokons
- Wrist reliefs. I've had those bars for years and they always find their way back on one of my bikes... they really are great bars.

Still some things I would like to do in the future, (I think the guys that have put a Bayonet front from a Felt on it have a neat idea. A Time Bandit fork would be another sweet item if I stumbled on one.) but overall I'm pretty happy.
My Blog - http://leegoocrap.blogspot.com

Jonnyo Coaching
Quote Reply
Re: Let's see your ride! [pburnett] [ In reply to ]
Quote | Reply
maxtbicycle
Post #4883 of 6425 (49048 views)
Hi pburnett,
Ahh do not worry about the picture. That bike Swift looks good no matter what. The disc and deep wheels look perfect especially the colors. Everything flows nicely together and yet still clean and simple. Are you going to cut the steerer tube down?

Quote Reply
Re: Let's see your ride! [ In reply to ]
Quote | Reply
Betonblack
Post #4884 of 6425 (49039 views)
Not my race rig but just started training on this aluminum beast after a respray and a rebuild using DA 7800 parts upgraded from the previous tiagra components.

Will post pics of the orbea once I get something better than an off angle garage shot.

Quote Reply
Re: Let's see your ride! [DuGuy] [ In reply to ]
Quote | Reply
jillian_o
Post #4886 of 6425 (48944 views)
My 2012 Cervelo P2. A friend of mine owns a vinyl shop and covered all the red and white stripes with pink vinyl. My husband did all the cable work with jagwire pink housings. I ordered the pink Sram decals from Graphics Shack out of the U.K. Got a re-fit from Go Tri Sports out of Hilton Head. Really happy with how this project turned out. 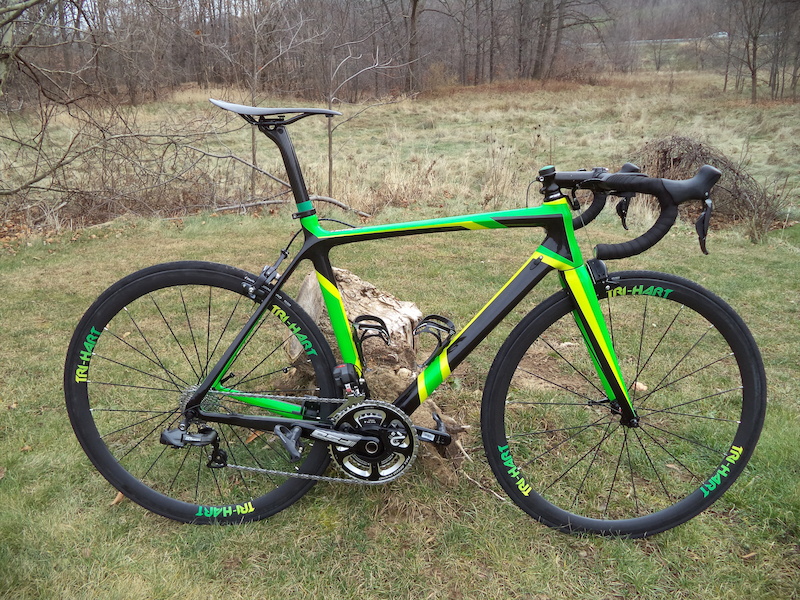 Very cool. Reminds me of I know, it's in the wrong chainring, but the view more then makes up for that little oversight.

The winter project, GURU CR.301
Can't decide on whether to make it a full TT bike, or a aero roadie with regular cockpit and clip-on aerobars
res, non verba
Quote Reply
Re: Let's see your ride! [RoYe] [ In reply to ]
Quote | Reply
Simmo Turner
Post #4895 of 6425 (47381 views)
Here's my P3, only had it for a month or so, loving it so far. 51 cm w/ 11 spd Dura Ace, Xlab pocket 300 and Xlab torpedo 400 setup. waiting on a set of TriRig Gamma extensions as i'm not very fond of the ski bends.
Hoping to be moving up to a power meter to suit the Rotor crank soon if i can find a good second hand unit to suit.
Also wanting to neaten up the cabling once i get my new extension positions how i want it. Since i'm not using Di2 and most likely won't be in the future i'll be using the Di2 port in the top tube and cabling the rear brake line through that so it doesn't hang around the side which is the only downside i can think of with this bike, apart from that i love it.

With the Zipp 606 wheelset Quote Reply
Re: Let's see your ride! [Simmo Turner] [ In reply to ]
Quote | Reply
Spartacus!
Post #4896 of 6425 (47030 views)
Here's my ride for Time Trials in UCI-races. Merida Warp TT with Dura Ace 9000, Pro Textreme and Pro 4-Rays. Pedals; of course they are speedplay, the best pedals made. Bottle cage; the best cages ever, the Elite Custom Race, I may buy the Elite Kit Chorno to use in races, time will show. This pic is from before I adjusted it to my body. Right now, the bike is a service to adjust the cables (the cable at the rear is to long) and to fix something with the base bar.