Tri
Classifieds
Lavender
Jobs
Womens
Notices
How was your week? Leap Day (Feb. 29) Edition
Quote | Reply
Dr. Tigerchik
Post #1 of 12 (4373 views)
Happy extra day!!! How are you?
maybe she's born with it, maybe it's chlorine
If you're injured and need some sympathy, PM me and I'm very happy to write back.
disclaimer: PhD not MD


This week:
- PROVINCIAL CHAMPS BABY! Sat & Sun racing, should get 8-12 races in over two days.
- Run 3x
- Skate 3x (aside from meet of course)
- Physio if I can get in early enough/late enough

I fly to Pittsburgh tomorrow for a conference. I am looking forward to the conference, but unsure how much swim time I will have... goal is to keep the run mileage to 55 or under. I will probably run all 7 days. Big goal = no eating issues.
Done! 49.9 mi run, with a super awesome speed workout in Pittsburgh, running on a warm morning over a bunch of the yellow bridges. Two bikes, 1 outside before I left (6 mi errand ride) and 30 min on the stationary bike at the hotel. 4 swims (8900 yards), two of them with a free guest pass to the PNC YMCA (yay for free guest passes!). The really good run workout, and one swim, was with a friend, and it was nice to catch up and have that company.


I love Feb. 29, so cool to have a special once every 4 years day.
maybe she's born with it, maybe it's chlorine
If you're injured and need some sympathy, PM me and I'm very happy to write back.
disclaimer: PhD not MD
Quote Reply
Re: How was your week? Leap Day (Feb. 29) Edition [tigerchik] [ In reply to ]
Quote | Reply
Midtown Miles
Post #4 of 12 (4304 views)
Midtown Miles wrote:
I'd like to do 2, maybe 3 swims, 3 trainer rides, 2 runs, and some supplemental weights, yoga and pre-hab.
I had a really good training week last week. 2 swims, 3 trainer rides and 2 runs, one OUTSIDE IN 62-DEGREE WEATHER IN MICHIGAN, plus weights twice (!) and a round of pre-hab. The only thing I didn't squeeze in was any yoga. My knee/IT band was uncomfortable but not painful for about one middle mile of my 5-mile "long" run Sunday and I did the last at a 9:58 pace, which means this run was both the longest and fastest in months. I will continue to build my glute strength but I am starting to believe that all the extra pre-hab is helping!

tigerchik wrote:
49.9 mi run
This would drive me absolutely nuts!!! =) Glad you could get in that extra training while traveling; I know that's not easy.

Also, AndyPants, good luck at Provincials!!!!!!!!!!
http://mediocremultisport.blogspot.com
Quote Reply
Re: How was your week? Leap Day (Feb. 29) Edition [Midtown Miles] [ In reply to ]
Quote | Reply
mistressk
Post #5 of 12 (4299 views)
Midtown Miles wrote:
this run was both the longest and fastest in months. I will continue to build my glute strength but I am starting to believe that all the extra pre-hab is helping!


W00t! Glad you're getting your stride back!

Managed to crack 200k (201.7) of running for the month of February without even needing the extra day!


I actually took yesterday mostly off - did my usual 20mins of lifting in the morning before work, but I only got about 3.5hrs of sleep and the wind was blowing ice pellets around at 60+kph when I got home last night, so I decided I'd just get to bed early. I honestly can't remember the last time I was under the covers by 10pm (alarm goes off just before 6am), and while I woke up a few times, I know it did me some good.


I may end up taking tonight off as well, since we're due for a really nasty winter storm - supposed to be 6+ inches of snow coming this evening alone, with more heavy wind. Deffo won't be hitting the pool as the streets will be a mess, and may not even make it in to work tomorrow depending on how quickly the plows dig us out.


Far cry from the trailrun I did on Sunday: 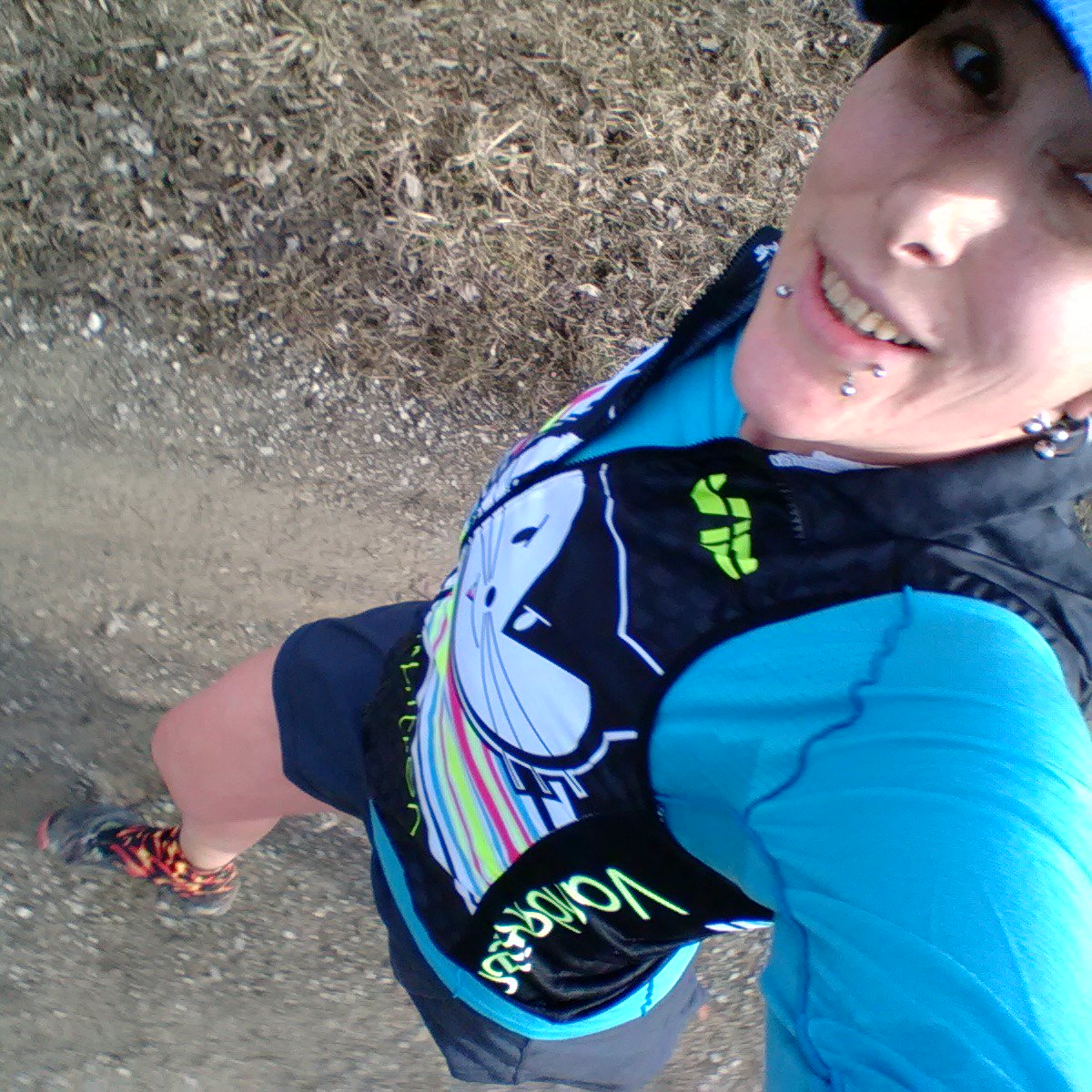 I totally did not need the wind vest and had to roll my sleeves up, but I knew to expect ice in the first couple of kilometers of the trail section I was running and didn't want to risk getting too chilled in the 50+kph winds. As for the ice, I was not disappointed - some dicey running there, but it opened up to mud and even some dry trail later.

This week: swim x 3, bike x 2, run x 5. First race of the year is on Sunday - it's either a 5k or a 10k run, I can't remember which I signed up for. It's also our last week before a ski trip and our kitchen will most likely be demolished while we are gone. I need to speak to the contractor and figure out whether I need to empty my entire kitchen before we leave.

The left 2nd toe seems to be fine - I don't notice anything going on there. Still some numbness in the very tip of my big toe, but it doesn't bother me and the burning sensation stopped.

My right thumb is still numb at the tip but overall was feeling better after I managed to trim the nail down so it wasn't catching on things as much (it had extended past the tip of the digit and I cut it back so it didn't anymore). I am able to use it pretty much normally again, though I can't put any pressure at all on the nail in any direction. I saw some bruising around the base of the nail as the polish I had on grew out, so last night I got curious and removed the polish to see exactly what I was dealing with.

Once I got a good look in some decent light, I immediately put a fresh coat of nail polish on. I honestly couldn't handle walking around with that thing exposed all the time, and I swear it feels worse now that I have an idea of what's under there.

If you really want to, click here for a somewhat disturbing photo.

I don't know what that darker-coloured cross is, but the whole thing looks entirely more raw than I would have hoped for almost 2 weeks after the trauma..

Quote Reply
Re: How was your week? Leap Day (Feb. 29) Edition [tigerchik] [ In reply to ]
Quote | Reply
Gee
Post #10 of 12 (4214 views)
I am working my way through testing for my new training plan/team. It is different, challenging, and fun. 3x300yards max speed negative split almost killed me. But I thought TC would most appreciate that I went to a different open water swim group, where a super nice girl in a Roka wetsuit and pink swim cap was really kicking everyone's butt. As it turns out, I can now add Rebecca Soni to my list of heroes I get to swim with, along with Diana, Gary, Andy, Jordan, and of course Monty. TC, you should come to camp and get on my list! :)

I also agreed to teach another year next year, and I am starting a kitchen renovation. And, it is sunny and warm! So, on the up side out here. Looking forward to seeing everyone at Xantusia soon.

What do you teach?
maybe she's born with it, maybe it's chlorine
If you're injured and need some sympathy, PM me and I'm very happy to write back.
disclaimer: PhD not MD
Quote Reply
Re: How was your week? Leap Day (Feb. 29) Edition [tigerchik] [ In reply to ]
Quote | Reply
Gee
Post #12 of 12 (4073 views)
TC - I teach statistics, research methods, and a very large variety of psychology/education/child development/linguistics/cognitive science classes, depending on where and when I am teaching. I also edit and write textbooks and digital resources in those areas. For years I have kept my eye on you as you progress through grad school and in your role as grammar police. ;)

All of my students know how to test whether Andy Potts' HR is higher on swim, bike, or run. But I am in transition and looking for new opportunities ... in case anyone out there in the ST universe knows of any!