Tri
Classifieds
Lavender
Jobs
Womens
Notices
How was your week? Feb. 13 Edition
Quote | Reply
Dr. Tigerchik
Post #1 of 17 (4364 views)
How are you? Do you have Valentine's Day plans?
maybe she's born with it, maybe it's chlorine
If you're injured and need some sympathy, PM me and I'm very happy to write back.
disclaimer: PhD not MD

Quote Reply
Re: How was your week? Feb. 13 Edition [tigerchik] [ In reply to ]
Quote | Reply
Dr. Tigerchik
Post #2 of 17 (4363 views)
Quote:
This week: swim M, T, F at least (M done) only swam M, T as was finishing slides for a talk on Friday morning ; run 6x done!; bike is a bonus nope
This week I fly out tomorrow to visit my brother in Salt Lake for one day/two nights, then to another interview for Thurs. evening / all of Friday. Another busy week :P
so, so good to see my brother!!!

No job news yet but am hoping for some this week :-)
goals this week 6 runs, 6 swims, 2 bikes
maybe she's born with it, maybe it's chlorine
If you're injured and need some sympathy, PM me and I'm very happy to write back.
disclaimer: PhD not MD
Quote Reply
Re: How was your week? Feb. 13 Edition [tigerchik] [ In reply to ]
Quote | Reply
TwoDollarSteak
Post #3 of 17 (4357 views)
Thanks for getting us started tigerchik. Glad you had a nice visit, I'm wishing you good job news and safe travels. You, jet setter, you :)

I'm back on my tri bike for my outdoor rides and that's good and the new fit seems to be working. I'll probably add a third run in the next few weeks, running twice doesn't feel like enough but anymore than three and I tend to have issues.

It's the same schedule for me this week: daily p/rehab, 3 strength sessions, 3 swims, 3 bikes, and 2 runs, 1 yoga class. Hoping to swim in the ocean this weekend but if the rain keeps me out again that's okay too -- all this green is pretty lovely.

I hope everyone has a great week!
(Formerly SoCalTricurious, now in the PNW).
Quote Reply
Re: How was your week? Feb. 13 Edition [SoCalTricurious] [ In reply to ]
Quote | Reply
Dr. Tigerchik
Post #4 of 17 (4354 views)
Thanks. I've sort of had it with planes :P

I am finally feeling better. I pretty much lost a whole week of training but started feeling well enough for some light physio exercises (glute bridges, planks etc) around Thursday and managed one trainer ride on Sunday. Unfortunately I took the view that "wine is basically vitamins" so I'm rather fluffy around the mid-section after having lots of vitamins last week and from winging every meal instead of the usual planned suppers with leftovers for lunch.

Exciting things from last week:
New toilet! (The old one had become crazily unreliable - the rest of the bathroom will be reno'd later but we really needed the toilet upgrade now.)
New car! (Got rid of the unreliable lemon finally.)
New Pyrex! (In various sizes.)

This week: 5 rides, including 1 FTP test for a total of 8h30m. Strength: two sessions at the gym and three BW sessions at home.

No real Valentine's plans - we're not into it and it's Dan's birthday next week so that's our usual February celebration.

That's it. And I've been eating so crappy. The weather was so beautiful over the weekend that I skipped out on my long run and my hubby and I went on a motorcycle ride. It was perfect.

But, have a lot of goodness ahead of me.

TC - glad you enjoyed visiting your brother - did he take you climbing? hope you get the job offer you really want :-)
SoCal - so jealous you can ride outside.
Scheherazade - keep taking those vitamins!!
SLOgoing - before the kids we used to have a motorbike and drive through the Black Forest on beautiful days - ahhhhh lovely memories! well done for x6 run.

So I had a busy sporty week last week and loved every minute of it, goals were:

I also went climbing x3 and I think I'm slowly making progress - like keeping my arms straight for the overhangs! my kids just do this naturally, but I had to be told this!! I was not born a monkey and it shows. Also you'd think with all the sport I'd have some muscles that help - NO! I'm discovering new aching muscles every day!!

This week I'd like a repeat of last week:
Swim x4, Run x5, Bike x5, plus some climbing

TC, we're all rooting for you on the job search!
No coasting in running and no crying in baseball
Quote Reply
Re: How was your week? Feb. 13 Edition [SLOgoing] [ In reply to ]
Quote | Reply
mistressk
Post #12 of 17 (4275 views)
Happy Valentine's Day womens! No big plans tonight - we're feeling a bit on the broke side after paying our 20% of my max dental benefits for the year (had 3 more fillings done last Thurs) plus more work to come for Tank, but we do have a couple of nice steaks & some asparagus to throw on the grill tonight so I get a night off from cooking! Probably just a walk together this evening; nothing fancy, but done with love.

My motorcycle is jealous of yours, SLOgoing! We had some mild weather on Saturday that would have made for decent riding but it was far too icy on the roads, then we got a big dump of snow on Sunday.

Saturday was a fatass "race" at Huron Natural Area, put on by a friend as a fundraiser for the Mood Disorders Society of Canada. Clay started at 5am and ran until 5pm - I came in as the "afternoon shift" as a bunch of people were leaving, running from 1pm-5pm. Conditions were icy in spots with snow on top that got mushier as the day went by; it warmed up to about 4c/39f and the sun came out here and there, but the traction devices stayed on the whole time. I got 32.5k in (5 x 6.5km loop), which was more than I expected, but at the cost of tweaking my damaged ankle again and my left hip tightening up on me. 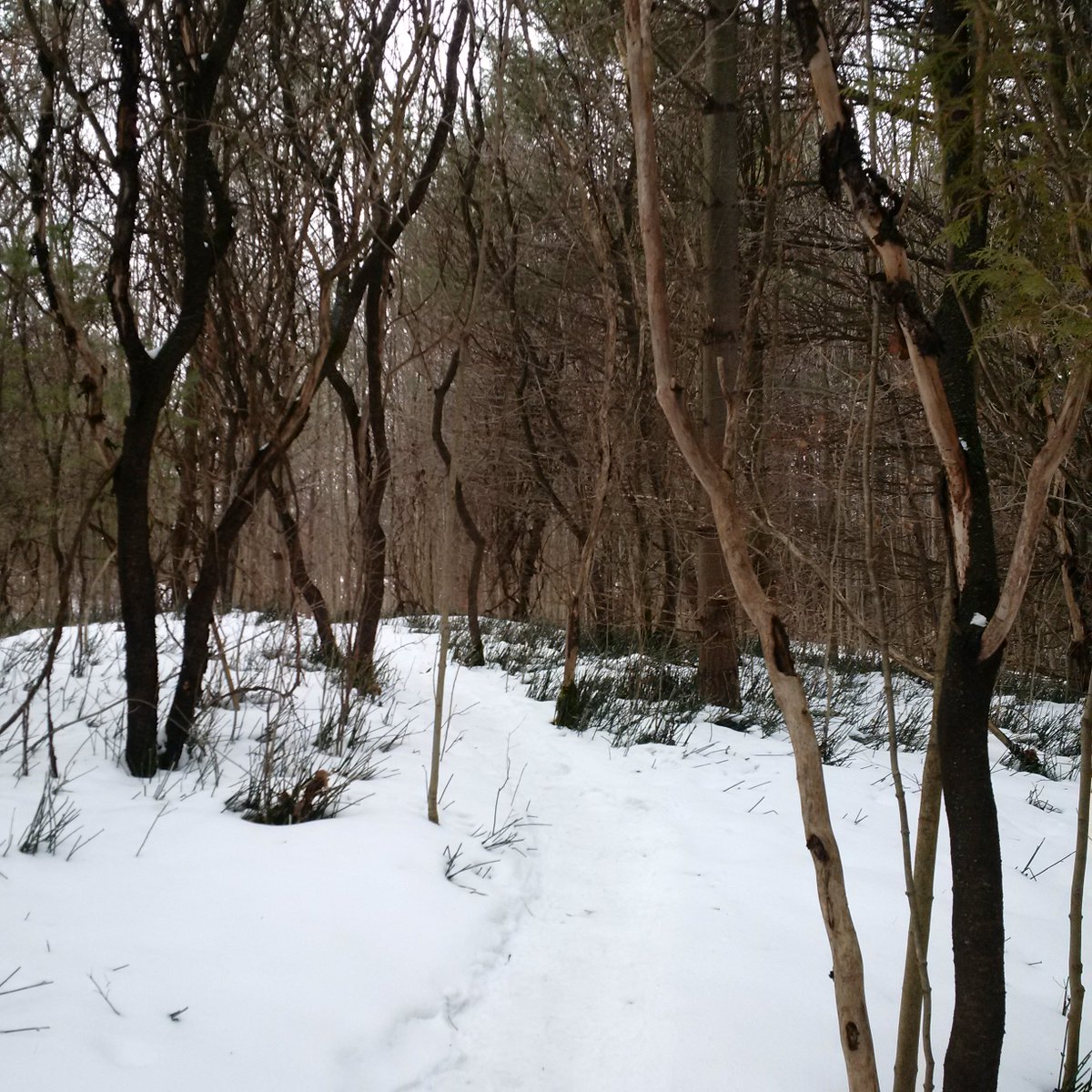 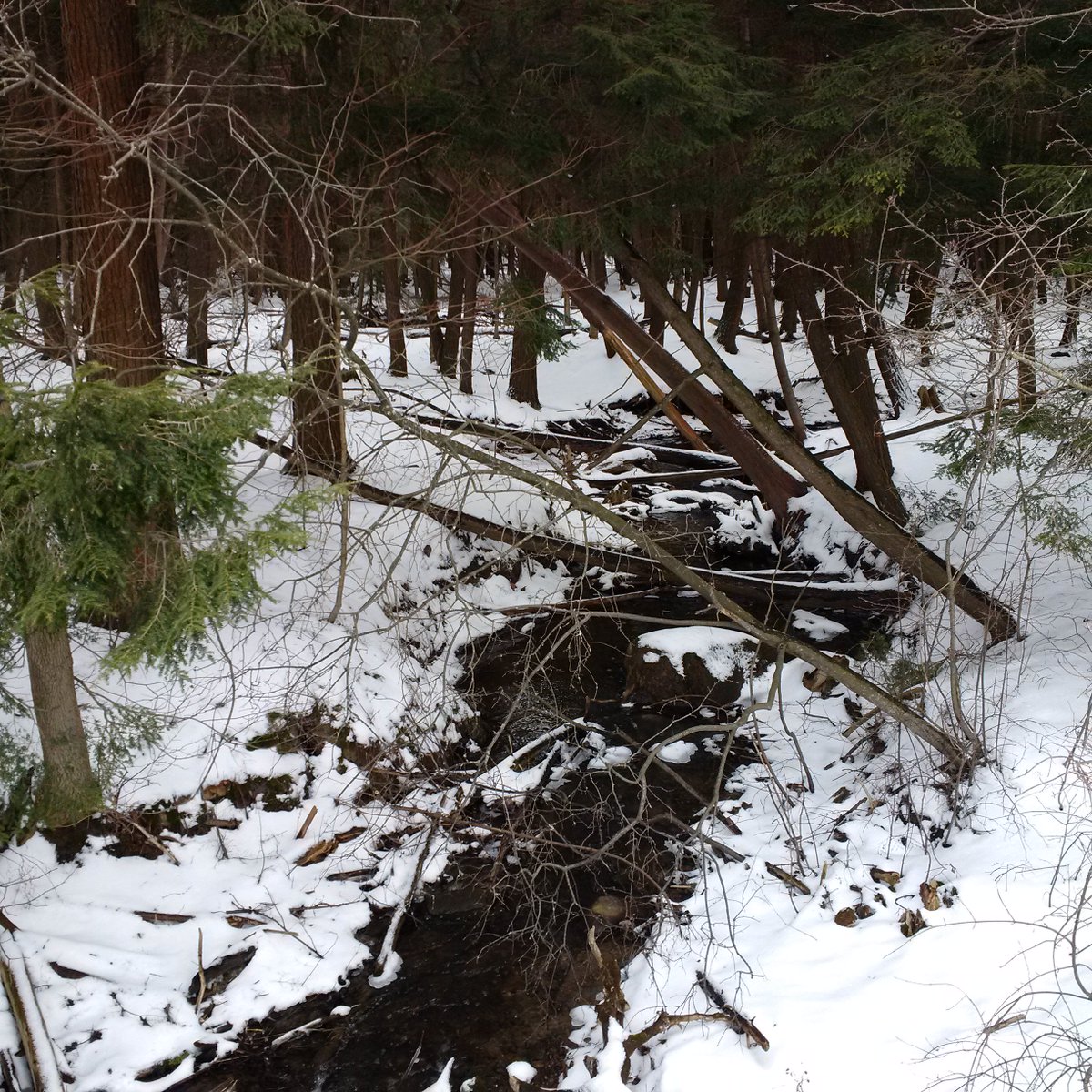 I did manage another hour-long run through the snow that fell on Sunday - ankle didn't feel great, but was in better shape afterward than it had been the day before despite postholing through some heavy, slushy snow where the trail runs beside a roadway and more snow on the trail itself.

At least none of it was quite as terrifying as last Wednesday evening. I set off as early as I could from the office to run down to my Mum's, having forgotten my headlamp AND my traction devices (though most of my route was on sidewalk). Got to the Cooksville Creek Trail and as I stepped onto the sharp downhill my feet nearly went out from under me - it was glare ice almost all the way down! I couldn't stop - just tried to control the sliding and keep from falling. No idea how I made it through, but I remained upright!

It went on like that for a few hundred metres until I got to the section that has some lights and gets winter maintenance, but even that was pretty dicey. 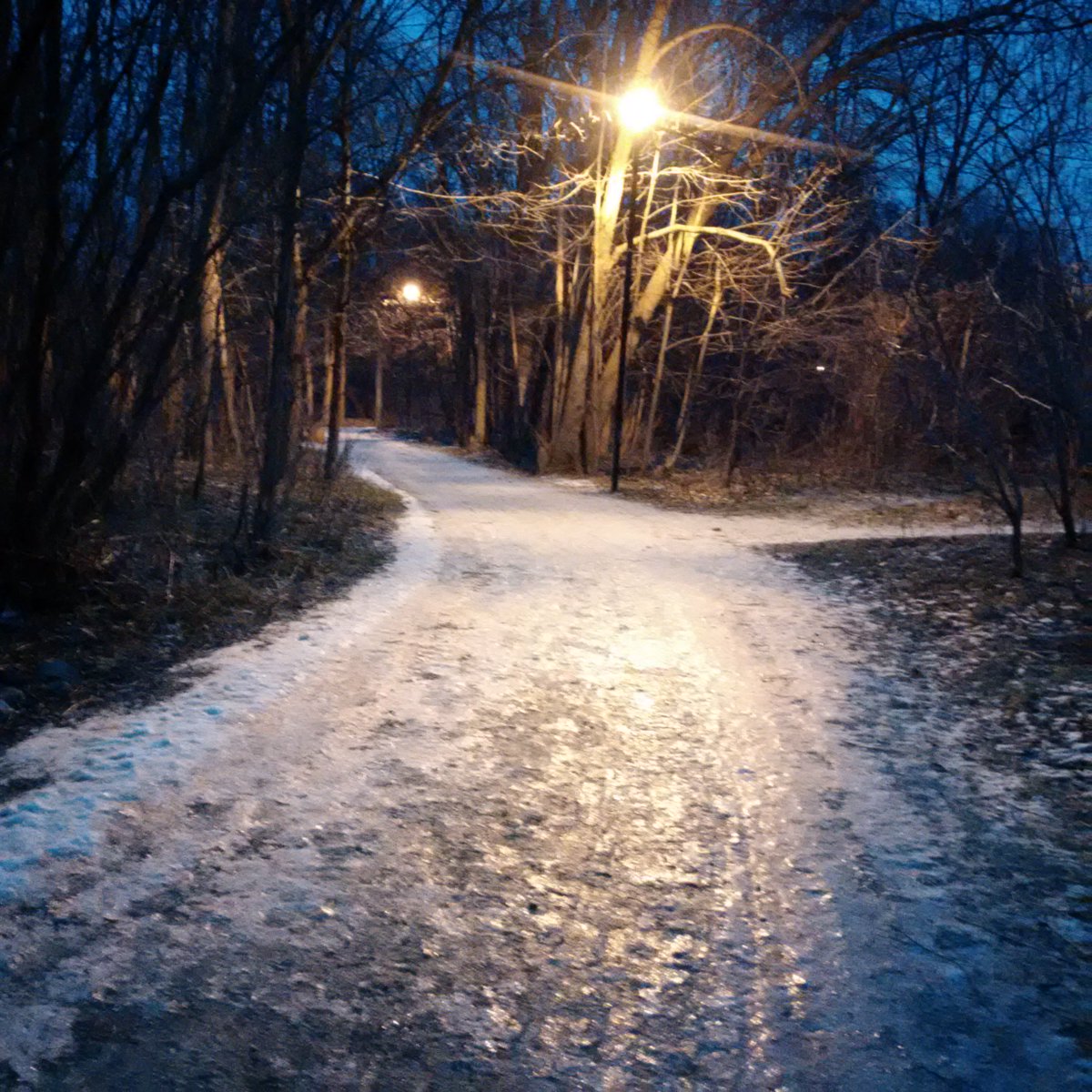 I was in the same area the next afternoon & couldn't resist going to have a peek in daylight. Figured it would all look quite tame in the sunshine and I'd feel silly for being so out-of-control and scared the prior evening.

Nope. Just left shaking my head wondering how the heck I survived.

Quote Reply
Re: How was your week? Feb. 13 Edition [Scheherazade] [ In reply to ]
Quote | Reply
TwoDollarSteak
Post #16 of 17 (4249 views)
Scheherazade, just South Dakota. Eventually, I'm going to get there to see the Badlands and Mt. Rushmore but I love America's Mountain West so I keep going there instead of someplace new.

P.S. I just saw this list of the most popular running routes in the major metros. I've done a lot of these and the link is a good bookmark if you're on the road: http://www.runnersworld.com/...ggest-us-metro-areas
(Formerly SoCalTricurious, now in the PNW).
Last edited by: SoCalTricurious: Feb 14, 17 10:50
Quote Reply
Re: How was your week? Feb. 13 Edition [tigerchik] [ In reply to ]
Quote | Reply
AndyPants
Post #17 of 17 (4224 views)
Monday was a holiday for us here (Family Day) so a bit delayed in posting. :-)

Last week: 2.5 weeks until next meet...
- skate 3x - DONE-ish - the last session I had to end it early after a relay teammate gave me a really crappy push (exchange) and I crashed into the boards - the boards without the mats. :-(
- dryland/drills/cables 1x - DONE
- run 2x - DONE including one run as a snowshoe on the trails near work...
- ride... hmmm... we got hammered with snow all weekend, and are expecting more on Wed eve which will switch to freezing rain... then pouring warm rain all weekend long. Not much fun for riding. So I'll aim for 1 and call it good if I get it in. - DONE with 2 rides to & from work and a club ride on Monday morning (technically this week I know ut holiday!)
- if it's really that miserable all weekend, then swim 1x.- Nope. We all went to a local ski hill on Sunday which was way more fun.


This week:
- skate 2x (bailed on this morning as I was not feeling well, stomach-wise... nauseous, yuck, in fact I went home from the rink and straight to bed, booked a sick day)
- run 2x
- ride 1x - it's going to just POUR for the rest of the week.
- optional swim 1x.