Tri
Classifieds
Lavender
Jobs
Womens
Notices
How was your week? Jan. 9 Edition
Quote | Reply
Dr. Tigerchik
Post #1 of 16 (3868 views)
How are you?

I am back at school and the first day of the term is a snow day :D
Fishtwitch is chlorintined!
disclaimer: PhD not MD

Back to school here - other than forgetting my son's backpack we had a good morning.

My goals for the week:

Quote Reply
Re: How was your week? Jan. 9 Edition [tigerchik] [ In reply to ]
Quote | Reply
SLOgoing
Post #3 of 16 (3847 views)
Hi! Good week last week. California got drenched with rain so I'm hoping that our lakes fill up. I'm tired of mud swims and there are still sharks in the ocean.

Did a 25k trail race on Saturday in the pouring rain and howling wind. It was awesome, actually. Mud was unbelievable. It was fun because I didn't "race" it - I stopped and took tons of pictures and chatted with the aid stations folks (home made hot applesauce, quesadillas, lentil soup, soda pop....). Honestly, hands down the best finisher "medals" I've ever seen! It was worth it! It was a total blast.

Didn't do a single swim or bike session... I'm going to try and get 1 bike in and 3 swims this week. I have my first race in late March so I guess I better start thinking about it. 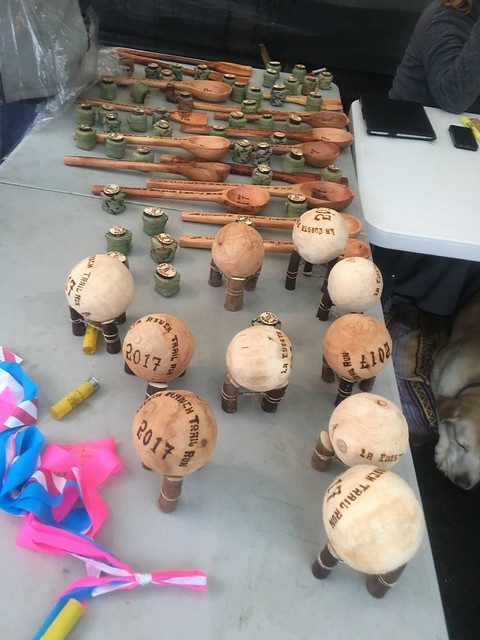 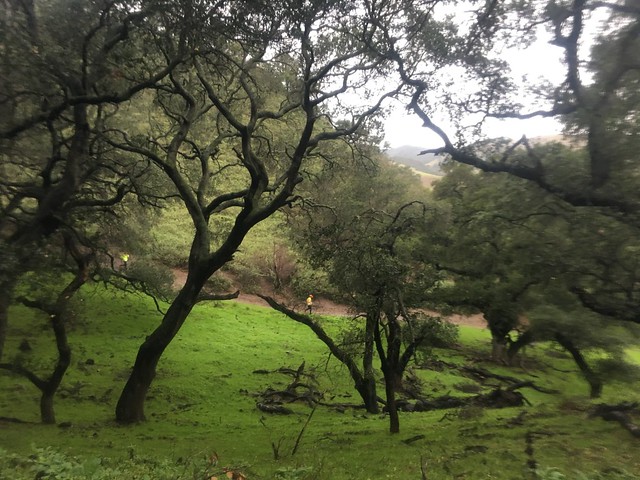 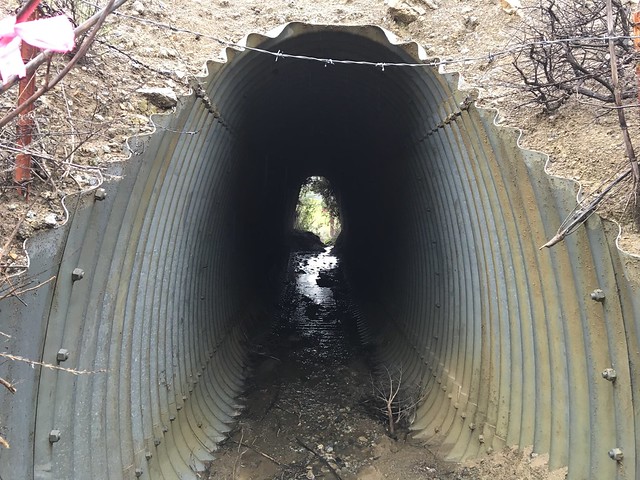 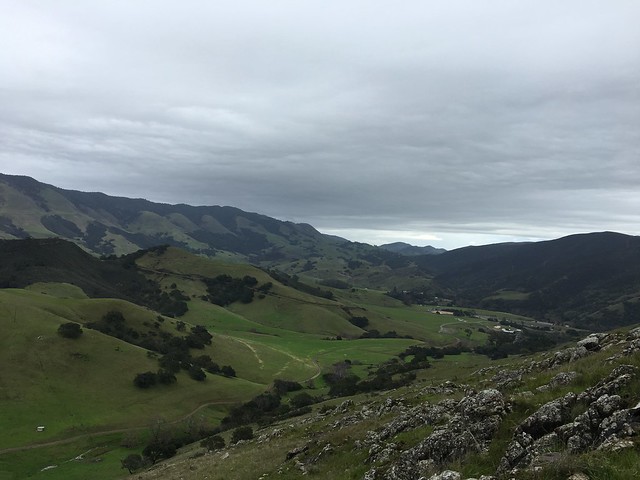 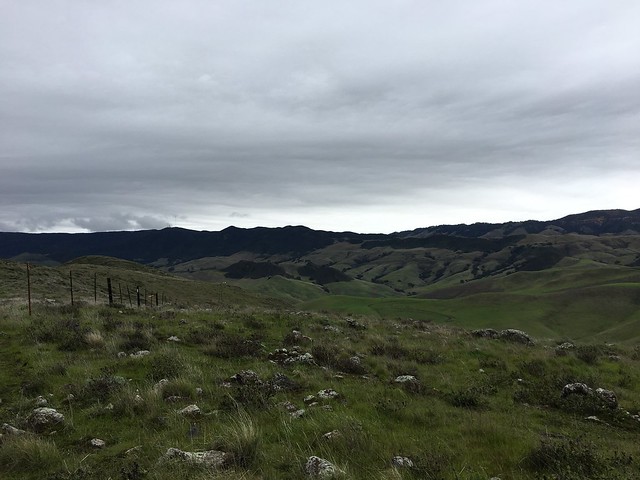 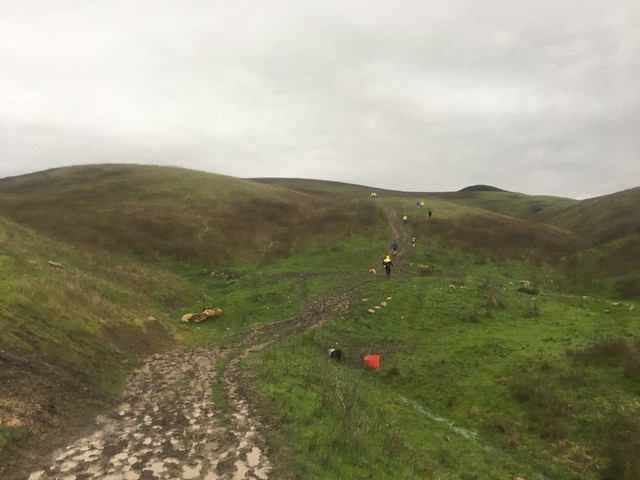 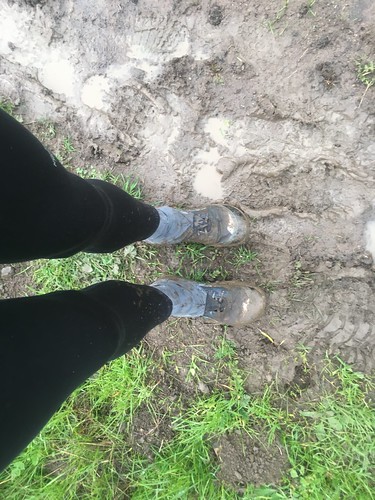 I had a really good time at my conference!
My big challenge in the coming 2 months will be eating well while traveling. Toward that end, I am going to try a no-candy-or-dessert week this week.

My goals this week are
swim at least 5 times
run less than or equal to 6 times
bike at least 2 times
Fishtwitch is chlorintined!
disclaimer: PhD not MD
Quote Reply
Re: How was your week? Jan. 9 Edition [tigerchik] [ In reply to ]
Quote | Reply
TwoDollarSteak
Post #6 of 16 (3825 views)
Hello, hello ladies of Slowtwitch. I hope everyone had a great week.

My week was good. Our polar plunge was rescheduled AGAIN. We seem to be solving the California drought by planing this little adventure.

My weekly totals were daily p/rehab, 3 bikes (2 trainer, 1 road), 3 strength sessions, 2 runs (one track, one easy 5 miler) 2 swims (both pool, blegh), a yoga class, and a quick rock climbing outing. I ended up redoing my track threshold test after talking to my coach and my results were about were I expected them to be given how things have been going. That'll get better.

Our adventure race is this weekend, so it'll be a light week of training for me -- daily p/rehab, 1 bikes, 2 strength sessions, 1 run, 1 or 2 swims, hopefully a yoga class and then 30+ hours of trail running, rock climbing, navigation challenges, puzzle solving, rucking, rappelling, and who knows what else... wish me luck :D
(Formerly SoCalTricurious, now in the PNW).
Quote Reply
Re: How was your week? Jan. 9 Edition [SoCalTricurious] [ In reply to ]
Quote | Reply
Dr. Tigerchik
Post #7 of 16 (3822 views)
Did you climb indoors or outdoors? That's my brother's sport :-) well, one of them. He skis too.

Have a great race!
Fishtwitch is chlorintined!
disclaimer: PhD not MD
Quote Reply
Re: How was your week? Jan. 9 Edition [tigerchik] [ In reply to ]
Quote | Reply
TwoDollarSteak
Post #8 of 16 (3818 views)
Too cool! I grew up skiing and climbing (among other outdoorsy things) but had to stop both when I went to college. Happily, I picked both back up in my thirties but since I live in LA it's a process to do either.

I've climbed outdoors only once as part of this recent brushing up period because it's been raining so much and there are 3(!) gyms on my way home from the office.

The race will feature outdoor climbing stage in the McDowell mountains of AZ. Teams of two will have a series of routes to chose from (more points for harder routes) and will have to belay one another. My teammate is also a triathlete with a climbing background -- we're pumped.

I guess I've graduated from physio - I'm now having a monthly check-in with a kinesiologist to keep working on strengthening all the bits. We're going to start introducing some barbell work which I am excited about! She asked me if I wanted to start running again and honestly, I don't (it's -36C due to the windchill and I don't want to run on a treadmill) so we'll wait until I can run outside before we start that up again.

After 5 weeks away from TrainerRoad (and all structured exercise), I have an FTP test today. Then jumping into a build plan - the plan is to ride x5/week as that worked well for me during base.

I also need to shed the holiday pounds but hoping that exercise + not eating three course meals twice a day will help with that.

As for gear and safety, everyone has to pass a check with the outfitter overseeing the rock climbing stages (Accidents can, of course, happen but I've climbed in AZ with this outfitter twice before and they are great).

Good luck to all those with jetlag.
(Formerly SoCalTricurious, now in the PNW).
Quote Reply
Re: How was your week? Jan. 9 Edition [tigerchik] [ In reply to ]
Quote | Reply
AndyPants
Post #13 of 16 (3727 views)
Can I just reiterate how AWESOME and INSPIRING all you Womens are? Seriously. Amazing - all of you.

Last week's goals:
- finalize what's left to do at work and what will be my last day - DONE (Jan 26th is last day, working through the TODO list right now)
- get new job arrangements sorted - DONE and holy cow - better than I expected... :-)
- skate 3x - DONE
- referee all day Sat - DONE
- dryland/cables/core/drills 1x - DONE
- run 1x - if the ice disappears! - FAIL due to continued icy conditions.
- BONUS - I actually SWAM last week! :-) and I enjoyed it!


This week:
- skate 3x
- dryland/cables/core/drills 1x
- ref 3days (this is a bigger western Canada-level meet, with video and electronic timing, much more high profile, some seriously high level skaters. I'm assisting which will be a nice change from being the Chief Ref. I should learn alot; this will be my LAST meet refereeing this season; and it will meet my requirements for advancement to Level 2 ref.)
- swim 2x (yeah, I know!)
- run 1x (ice dependant)

So, that is my first piece of news -- I am swimming 16k a week (4 days, and it is raining on most of them) and not dying. I have a bit of capsulitis in my left shoulder, but it's not from swimming according to my medical team (doc and PT), and it feels ok in the water. I am, I think, getting faster, but my ultimate goal for the year was to be "Roka First Out" at my A race this season, and yesterday the participant list was published; one of the best swimmers in my AG is racing and she can outswim me by around 10% on the day. I will probably readjust that goal!

I went to the doctor today for an annual checkup, and apparently I have a pulse rate of 45. The nurse thought I was kidding when I said I am currently "exercising" 3+ hours a day, 6 days a week, and she actually said, "Do you not have a job???" My doctor was impressed with my shoulders and lats, and when your (Ironman) doctor says "OMG" you know that 16k is working. I am waiting for lab reports on my iron and my thyroid, which are somewhat troublesome at my age.

I signed up for a 6-week advanced bike mechanics class, starting tomorrow. I hope it is truly mechanics and not just "here is how you change a tire." I can replace cassettes, pedals, fork, headset, etc., but I want to learn more about the drive train, derailleur, and cabling. I am riding 13ish hours a week right now at the end of a big training block, and both of my bikes need some tuneup work, so I am hoping this class ends up saving me money in the long run.

Long run, well, my coaching team is in favor of less run, less stress on the body, so I am only running an hour a week right now. I think that will change next week, though, when a new training cycle starts. This is still a new coaching team for me, and it is sometimes weird, sometimes exhilirating, and always a challenge.

Have a great rest-of-January, womens! Hope to see some of you in April.

Quote Reply
Re: How was your week? Jan. 9 Edition [SLOgoing] [ In reply to ]
Quote | Reply
mistressk
Post #15 of 16 (3678 views)
Wow, I would love to go for a run there SLOgoing! I've only ever done a tiny bit of mountain running, being 600mi from the nearest (non-buried) range. Thanks for sharing the gorgeous views.

So, the indoor ultra was...something. When I hear "indoor track" I think warm air & soft surface - what I got was a 10c/50f building and about 0.001% humidity with huge fans blowing even chillier air over the PAINTED CEMENT track. I'm just glad I decided against using a pair of trail shoes since even in road trainers my poor left ankle got pounded into pudding - all my runs over 1hr lately have been on trail so I'm just not used to the hard surface, and the dry air was horrible with the remains of the sinus infection. I certainly wasn't the only one beaten up by the track, despite changing direction at the top of each hour. The change of direction involved a u-turn at the timing mats onto the inner track for half a lap, which was nice and soft...but also cambered at the ends, so you had to run a tight curve on a side slope. After the first couple of changes my ankles and knees said nope, so I'd walk until it flattened out and we moved back to the outer cement track.

(This was heading out for my last lap, which I finished with 32sec left on the clock. Note the sweater on Rebecca behind me - it was chilly in there!)

Quads weren't sore at all (bonus of no hills), but hamstrings and glutes were achy and my left ankle is still feeling a bit sore from the abuse. I would maybe have gone out for a short run today, but:

1) My cold got much worse starting Sunday evening, most likely from immune suppression due to the race on Saturday.
2) It's really icy out after a bunch of snow yesterday that turned into freezing rain.
3) I had to have an emergency extraction of my upper & lower left-side wisdom teeth yesterday morning.

So, while I'm back at the office today I don't think I'll be running until at least tomorrow. I spent most of yesterday in a La-Z-Boy chair under a Star Wars quilt watching DVDs and drinking smoothies, so just being back at work today is a big step and I'm feeling pretty awful between the sinusitis and the sore sockets.

I did manage to get out for a nice trail walk on Sunday afternoon before everything went to hell.. 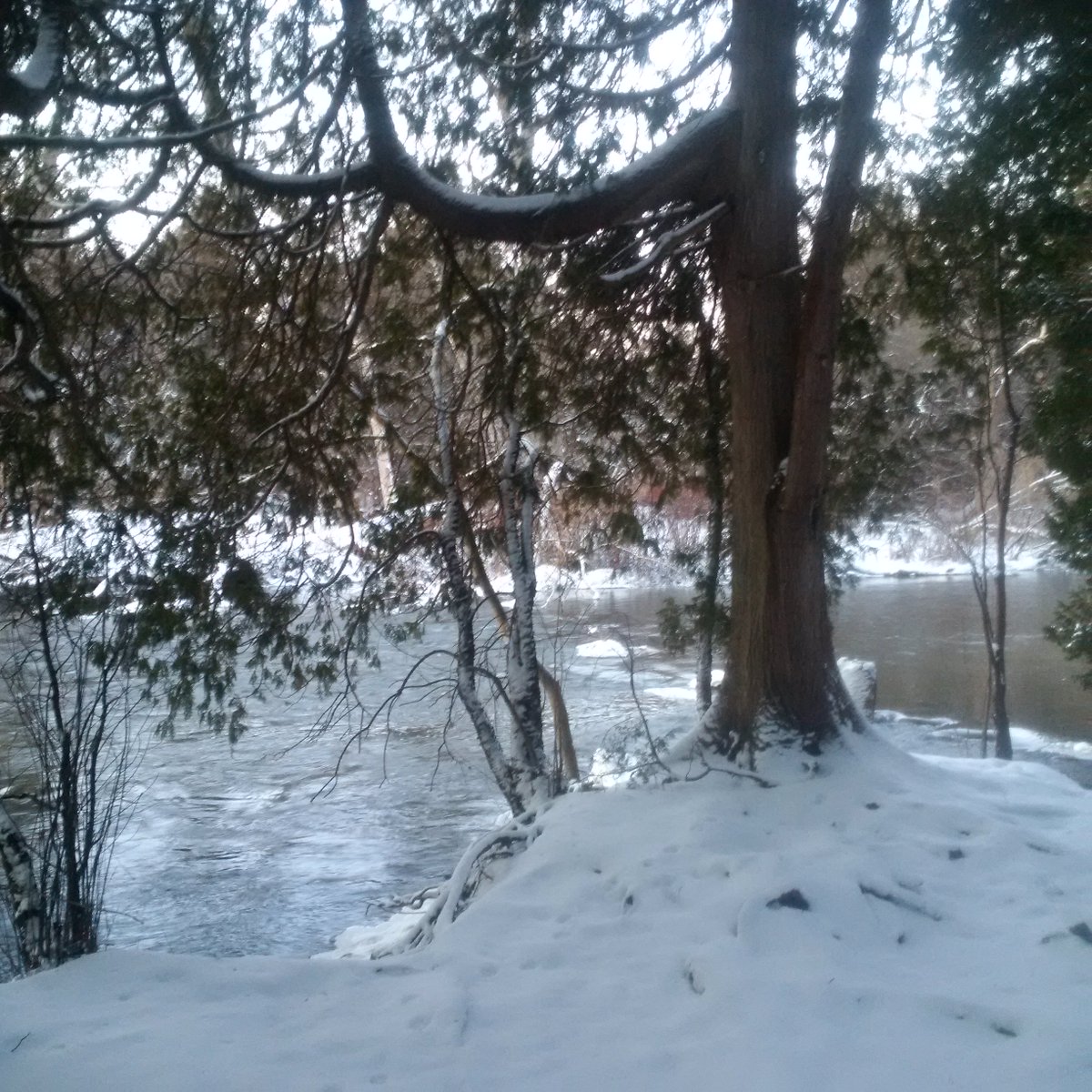 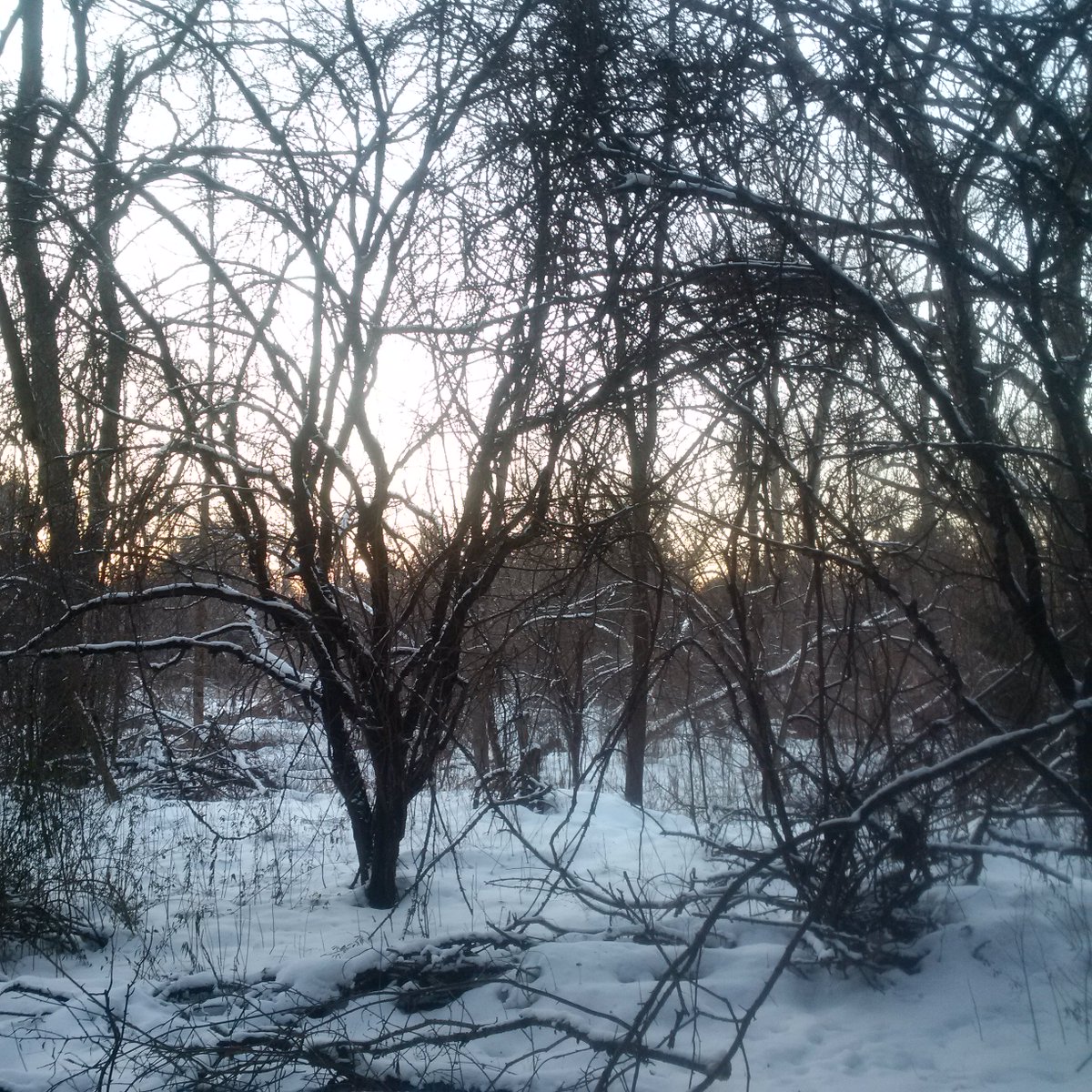 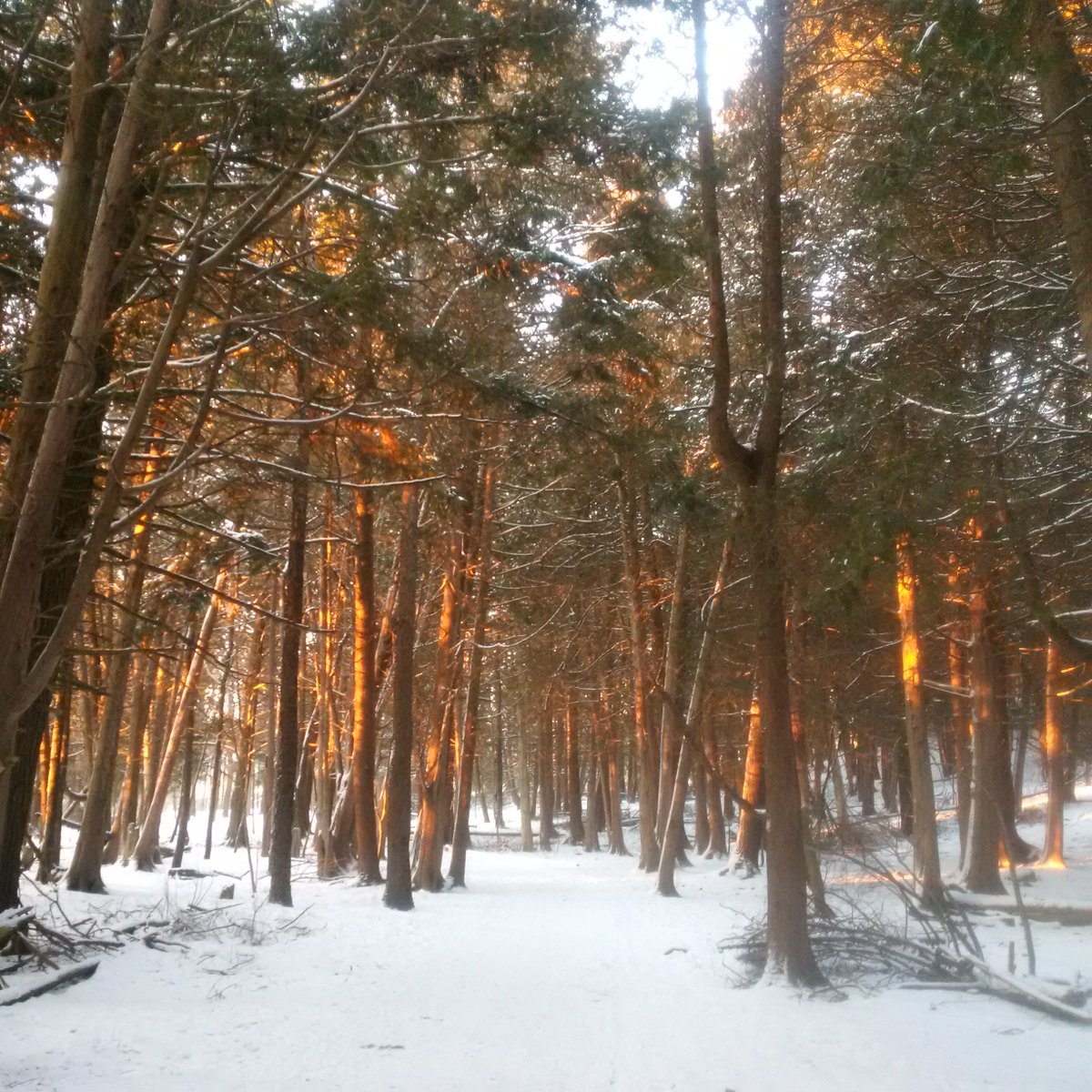 My goals for last week: swim x2 - none (lots of snow and ice, so didn't want to drive - yes, I'm a wimp) run x5 - did 3, bike x5 - done. I have really felt the lack of swimming this week, so a bit annoyed my swim fitness has taken a step back. However, the bad weather made me get back on my bike.

On Saturday I had my first top rope lesson, it was so much fun! Going again this weekend. I also really enjoyed running in all the snow last week, when it gets icey I just pop my ice spikes on, they're brilliant and make running in slippery conditions so much safer even steep downhills are no problem.

This week swim x4, runx4, bike x5. Main goals are: work on getting my swim fitness back (usually need about 2wks) and get on my bike regularly (got Roth in the summer!)