Tri
Classifieds
Lavender
Jobs
Womens
Notices
How was your week? Dec. 9 Edition
Quote | Reply
Dr. Tigerchik
Post #1 of 21 (3077 views)
snoooow day for me!!!
disclaimer: PhD not MD
Quote Reply
Re: How was your week? Dec. 9 Edition [tigerchik] [ In reply to ]
Quote | Reply
Dr. Tigerchik
Post #2 of 21 (3075 views)
Quote:
Goals for the week: LOTS of swimming (like 15-20k) CHECK, bike commute a couple times (rode in this morning so one done) CHECK done twice might have done more but we got nailed with snow on Friday, day off from running (this is always a goal :P ) usual fail
Academic goal = A on Friday's final exam. I should think of a reward for myself should I make that. exam went well, do not know score, did not come up with a reward... though may buy myself new leopard print swim cap.
Food went ok, just 1 bad day


Short recap of the CX business. Sunday's race was frigid cold! Ouch! The one competitor I've been going back and forth with a few times was there and for 1.5 laps we were trading off who was ahead. Then she fell... but got up quickly and seemed to still be hot on my heels. But then she faded. Then my other friend I thought was catching me, so I had to keep up the pressure. Whew. Held on for 5th, even when the mtb kid I was lapping fell right in front of me on the last turn into the finish straight - I saw the fall coming and avoided him without issue. :-)
Wound up 4th for our little series. All in all, I'm really happy with my CX season. Last year I raced with the 3/4s, and was 3rd for the series. This year I moved up to the 123s and was 4th for the series. I have no problem with that!
Quote Reply
Re: How was your week? Dec. 9 Edition [tigerchik] [ In reply to ]
Quote | Reply
nad
Post #4 of 21 (3024 views)
TC - you continually amaze me w/ your swim.
Determination - great season, and great race. Good job.

My week was ok. I was scheduled to run Dallas 1/2 marathon, but it cancelled due to weather, so I was kind of half tapered, and then had to make up ground by end of week.
Swim 3 x - hooray. My swimming is doing well, and I don't dread going to the pool as much any more. I've even made it there on really cold days.
Bike 3 x - I wish it had been 4, had I known I wasn't going to run Dallas
Run 5 x, but lower miles and higher intensity than previously


My man and I cycled in a Santa Claus Parade on Saturday as part of the "float" for an awesome local bike shop - it was -5c/23f with a wind chill of -12c/10f with intermittent snow, but we had a hoot and I decided since I was already cold I'd just hit the trail to get home instead of putting my bike back on the rack on the car. My husband thinks I'm nuts (he took the warm car and even rode in his giant down coat) and my bottle was frozen by the time I made it halfway, but it was fun! 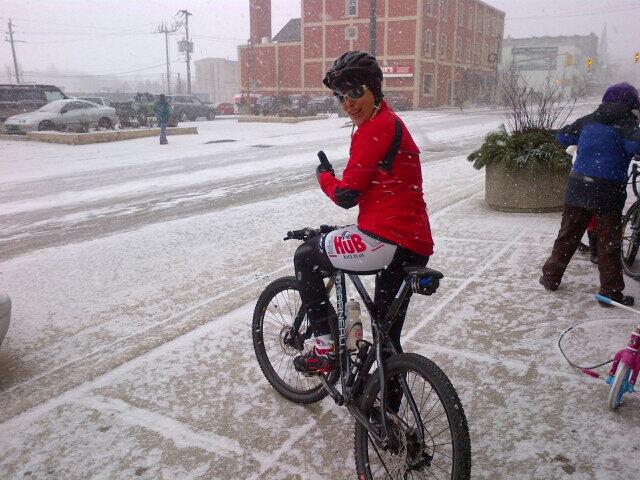 
Having some tattoo work done on Saturday evening, so I'll have to take a few days off running and probably at least a week out of the pool afterward. Should still be able to spin on the trainer, but I think Sunday may just be "topless rest day" - don't think Tanker will mind!

I miss you. Winter is starting to hit here in Maine, and in addition to having 20 million holiday concerts to play, I've picked up a second job for the season.
So...... Workout time has been precisely zero. I suck. (But my family have really great Christmas presents thanks to all the hours working the register in Target!!)

However, I did sign up for the 100K ride at next years Tour de Cure (Go Red Rider!) as some incentive to get my butt down cellar and on the trainer.

Congrats on all the serious working out going on!! I am going to live vicariously through everyone else's exercise for now, and hope I have something useful to contribute come the new year.

Ankle feels ok for running & skating, but I can still feel it when I uncleat (that twisting motion). Got new speed skates and the boots are totally different - very stiff so it's been challenging to get used to them. Still loving the skating though! :-)

But I work at a private school and we still had classes - and there were lots of snowball fights between classes! And I did get to enjoy a beautiful sunset reflecting off of the fresh snow this evening on my towpath run through the snow! I wished I had a camera with me to share a pic with everyone here.

This week start ramping run frequency - have decided to try my first half marathon at the end of March.
4 swims (1 done)
5 runs (2 done including this evenings snow run!)
2 rides
2 strength (1 done)

TC - you do amaze. Your swim and running amazes me.

I had another fun - I was reluctant to run last night as wind chills were in the single digits. I went out anyway. Ran into a friend and I think we're going to start doing Tues. night runs! So excited!
Quote Reply
Re: How was your week? Dec. 9 Edition [tigerchik] [ In reply to ]
Quote | Reply
SDCali
Post #20 of 21 (2863 views)
Late to the party this week, still trying to recover from Sunday's race.
Last week:
Tues & Thurs- Run
Weds- easy spin class
Friday- off
Sat- Drive to Palm Springs/Desert in pouring rain almost the entire way, walk around expo find friends.
Sun- race HITS Olympic Distance- of the group I went with I was the only female doing the olympic, there were 2 guys doing the olympic tri and one doing the olympic aqua bike, the rest of the gals and 2 of the guys did the sprint race. Very cold day out in the water, was numb footed until about mile 2 of the run. It was a good race, as I beat one of the guys, passed him sometime during the swim (men had a 3 minute head start), managed to hold him off on the bike (he gained 4 minutes here), then drove the final nail in on the run (I picked up 5 minutes on him). :D
This week-taking it easy, wednesday- spin, thursday-meet with coach, saturday- Santa run 10k, Sunday- breakfast ride, then tamale party (hosted by one of my teammates).
check out my blog http://theswimmingtriathlete.com