Most of the press we've seen in the last few months about the new-for-2009 Shimano Dura Ace has focused on the electronic version of DA. Stefan Schumacher medaled on eDA at last year's World Championship Road Race, and he and his Gerolsteiner team mates have served as guinea pigs for eDA ever since. While the pure novelty of electronic shifting tantalizes, we got our own medals (for bravery) for fighting at the Battle of Zap and Battle of Mektronic. While we're intrigued by the alleged telepathic shift quality of eDA, it's hard to shed our concerns for its weight, its durability, and its reliability.

The excitement over eDA has been noisy, and it's obscured an underappreciated fact: Along with eDA, Shimano is also releasing a new version of non-electronic DA. It'll be known as Dura Ace 7900, and we've finally seen our first confirmed technical details about 7900. The purpose of this What's New posting is to shed some light on what you'll be seeing in the new-for-2009 non-electronic Dura Ace.

Here's what we DON'T know about Dura Ace 7900: Weight and cost. As soon as we get this info, we'll pass it along. But, for now, all we have is basic technical info. And, sorry, we don't have photos either.

Here's what we DO know, on a component-by-component basis:

STI Levers -
Rear Derailleur -
Front Derailleur -
Crankset -
Chain -
Cassette -
Brake Calipers -
Flight Deck Computer -
A final note on our understanding about backwards compatibility:
Rear Drivetain -- The 7900 system is only compatible with other 7900 components. The 7900 rear derailleur is compatible with 7800-series cassettes, but that's it. There is no other cross-compatibility. This also means that 7800-series components cannot be used in piecemeal with 7900 if your plan is to upgrade one component at a time. More or less, you'll need to upgrade to 7900 STI, rear derailleur, cassette, and chain in one fell swoop.
Front Drivetrain -- Same story. There's an Iron Curtain between 7900 and 7800. The only kinda, sorta compatibility is between the 7900 front derailleur and the 7800 crankset. Shimano states "slower shifting may occur depending on frame dimension" if you choose to mix things like this. We're not sure if "dimension" means frame size or geometry or what. But we can't imagine someone running a full 7800 bike with the exception of a 7900 front derailleur, so it's not something we're terribly worried about.

Brake Systems -- The 7900 STI Levers are compatible with 7800-series brake calipers.
We're looking at a best-case scenario of a late September 2008 delivery timeline. We're sure it'll be all over the '08 Tour de France, and in full force at the Eurobike tradeshow shortly thereafter. But in terms of delivery, if it's before Halloween, we'll be stoked.

Quote Reply
Re: Dura Ace 2009 - Interesting! [Macho Grande] [ In reply to ]
Quote | Reply
jamiewilson3
Post #3 of 44 (13082 views)
Thanks for posting. I read this a few days ago and it is very enticing, I have to admit. I am glad that Shimano is finally releasing a compact to the dura ace line. The big question is what price point it will come in at???? I am going to upgrade from my DA9 group in the next year or two, and it will probably be Red or DA, depending on the price points. Only time will tell!

Quote Reply
Re: Dura Ace 2009 - Interesting! [Macho Grande] [ In reply to ]
Quote | Reply
ms6073
Post #4 of 44 (13033 views)
There is a multi-page thread over at weightweenies (http://weightweenies.starbike.com/...6aa363ee67f77537867b) about this new version of Dura Ace and includes comments from industry members who were in attendance for Shimano's recent OEM presentation of the pre-production prototypes. the discussion went on for a good month when a few images of various quality finally were posted and now their is a debate raging about whether or not the new shifters eomploy SRAM technology similar to SRAM double-tap or traditional STI shift lever actuation! Personally I like the fact that the new brake/shift levers appear to incorporate the hidden cable runs ala Campy and SRAM as well as what appears to be better ergonomics to adjust lever reach. I had not given much thought to the STI versus double tap debate until mid-way through a road race this past weekend when I realized exiting a high-speed corner just how often I shift while pedaling and using the brakes to modulate speed approaching uneven corners!
Â¯\_(ãƒ„)_/Â¯
Quote Reply
Re: Dura Ace 2009 - Interesting! [ms6073] [ In reply to ]
Quote | Reply
cyclenutnz
Post #5 of 44 (12881 views)
Actuation is the same as always. As for the cost - somewhere between 15-30% more. It's going to be a shock for consumers next season - especially you guys in the states with the weak currency - everything is going up big time
Speedtheory

Quote Reply
Re: Dura Ace 2009 - Interesting! [cyclenutnz] [ In reply to ]
Quote | Reply
Koz
Post #6 of 44 (12697 views)
Cost has been my biggest beef with the cycling components companies since the shift from 9 to 10 speeds. While I realize there was a bit of an increase in technology between the two and the companies have every right to charge for the research that went into it (being an engineer, that's the bacon I take home, too), the cost of components literally doubled overnight. If I suggested a refinement of an existing product line that would cost the customer twice the current cost, I would get laughed out of the office. Even a 20% increase is huge.

Those of us that tend to make gradual improvements over time got totally hosed by the decision to create an atmosphere of "buy a frame and get free components" (or vice versa, depending on perspective). Also, when a component breaks, which will eventually happen to every part, it's almost not worth it to replace the part versus replacing the entire bike (depending on the part), which really is completely insane, particularly considering bikes are now expensive enough that banks offer financing options for them. Now, by weight, SRAM Red is nearly twice as expensive as open market silver (although still trailing gold by a bit). By comparison, a typical $20k car is about 1% that (not counting fuel).

And I wonder, I really wonder, if Campy and Shimano have considered that that huge jump in cost opened the market for SRAM to barnstorm the party and grab relatively huge marketshare in a matter of months. And there are rumors that there is(are) additional full gruppo manufacturer(s) on the horizon.

And, yes, I do realize that I sound like the old man on the back porch harping on about how things were better, "back in my day..." ;) 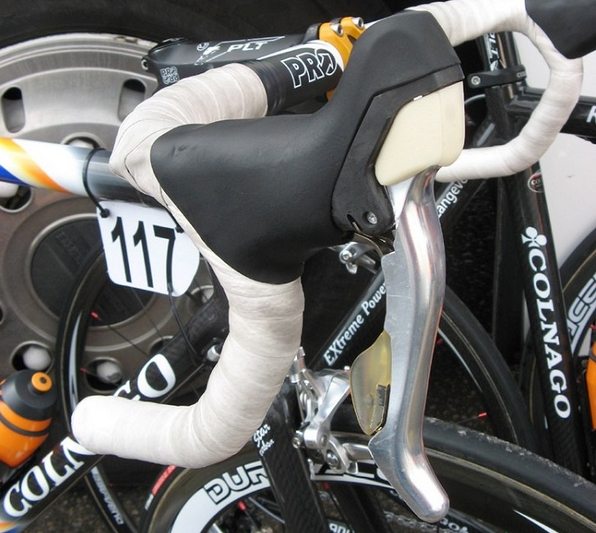 http://home.comcast.net/...omitron_cycling.html
Quote Reply
Re: Dura Ace 2009 - Interesting! [Koz] [ In reply to ]
Quote | Reply
cyclenutnz
Post #11 of 44 (12254 views)
Most of the price jump is materials. Sram is taking big market share for next year because their lead time is much shorter and more reliable than shimano. Visited one of their factories and they are adding production lines constantly so that they can get to 45 day lead time on Red and stay there.
Speedtheory

Quote Reply
Re: Dura Ace 2009 - Interesting! [Macho Grande] [ In reply to ]
Quote | Reply
poptartpower
Post #12 of 44 (12052 views)
I wonder if Shimano will continue with a triple crank in the 7900 line? My guess is not because of the availability of the compact crank set. Or am I wrong?

What if the Hokey Pokey is what it is all about?
Quote Reply
Re: Dura Ace 2009 - Interesting! [Record10Carbon] [ In reply to ]
Quote | Reply
Mr. Tibbs
Post #14 of 44 (11969 views)
Record this has pushed me to your side. ShimaNO sucks.
customerjon @gmail.com is where information happens.
Quote Reply
Re: Dura Ace 2009 - Interesting! [Macho Grande] [ In reply to ]
Quote | Reply
sperera
Post #15 of 44 (11908 views)
Post of the month for me! Thanks....excellent info....the main issue i have with Dura Ace is being addressed in that the STI levers will include reach....I have small hands and its a struggle to brake when on the drops for me......aside from that i look forward to another fantastically engineered groupset from the master of design and smoothness......

CAN SOMEONE EXPLAIN THIS THOUGH:


I bought some Zero Gravity brakes and took em off to put back Dura Ace as they made the bike judder BIG TIME under braking....
Stephen Perera
Gibraltar, Europe
graphics@gibraltar.gi
Quote Reply
Re: Dura Ace 2009 - Interesting! [kristiancyclist] [ In reply to ]
Quote | Reply
Macho Grande
Post #16 of 44 (11847 views)
I would highly doubt they'll have a triple if they are offering a compact. Why waste the overlap when a knowledgeable cyclist or shop owner could tell them that a compact with the right gearing will do the same as a triple?

my guess is that within 1 year, there will new components for all the other shimano groups that will run on the new shift standard, so all the new groups components will still interchange.

uh, not exactly. remember, shimano is the only maker of dual control levers where the brake lever itself has a second function: to shift the derailleurs. no other component maker (including campy and sram) have levers with this novel feature.

Where would you want to swim ?
Quote Reply
Re: Dura Ace 2009 - Interesting! [sperera] [ In reply to ]
Quote | Reply
poptartpower
Post #21 of 44 (11671 views)
I have the Zero Gravity brakes installed on my bike with Dura Ace levers. The combination works well for me. It sounds like your brake pads need a little bit of toe-in?

If tradition holds, they'll trickle the technology down year by year to the otehr groups. When the latest iteration of DA came to market Ultegra got the latest upgrade a year later followed by 105 still another year later. Tiagra et all jsut got the new shifter design, etc last year...

What if the Hokey Pokey is what it is all about?
Quote Reply
Re: Dura Ace 2009 - Interesting! [bigadam] [ In reply to ]
Quote | Reply
Tom Demerly
Post #24 of 44 (11629 views)
Huge. True too.
Tom Demerly
The Tri Shop.com
Quote Reply
Re: Dura Ace 2009 - Interesting! [Record10Carbon] [ In reply to ]
Quote | Reply
Macho Grande
Post #25 of 44 (11621 views)
Ok, they don't have the 145 year tradition that Campy does, but redesign and incorporation of new technology trickles down over the course of a few years with Shimano. They have not simply introduced 6 new product lines with the same technology because it allows people to mix and match. With introducing DA and waiting for the other grouppos Shimano allows the early adopters to buy the stuff up.